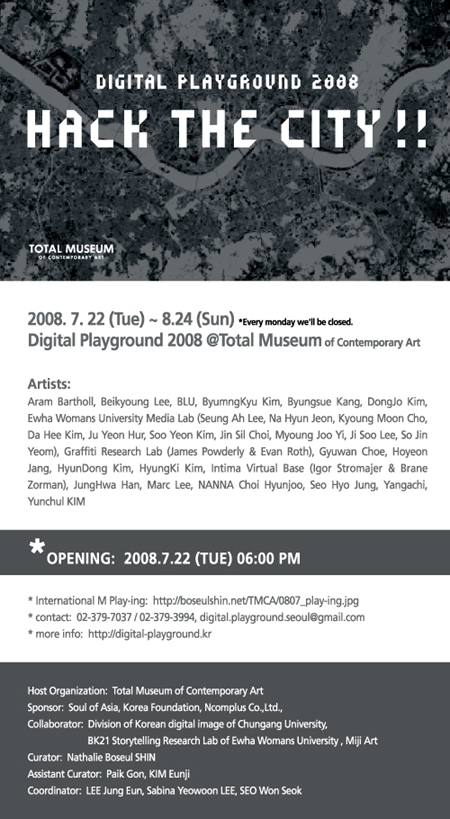 Nathalie Boseul SHIN curator at Total Museum of Contemporary Art, Seoul, South Korea invited me to run the WoW workshop/performance for this exhibition. “Digital Playground” is an annual media art exhibition started in 2005 at Eujeongbu International Media Art Festival. I am quite exited to run WoW in korean hangul letter system.

Recently, the outlook of Seoul is rapidly changing. It means we are surrounded by ‘under construction’ sign boards. Seoul is under-construction. One day, we have the artificial river, Cheonggae-cheon” at the down town, huge buildings, parks. What is changing is not only outlook, but our daily life is also changed. It is no longer surprise thing or imagination to watch TV or talk with friends face to face.
Last year, Seoul city government announced big plan ‘Seoul city gallery project’ which is for making Seoul as the art city. Many art works are installed on the street, overpasses. People can enjoy art in the park. However, take the different perspective, and ask to ourselves. for what we need art installations in public spaces? Furthermore, what is purpose of art in that sense? There are many kinds of arts, but if we can say about contemporary ‘media’ art, it should be more clear about that question. As I quoted above, “artists alone can’t change the world”, but I believe “artists can make people see or think the other side of what is actually happening with artworks or projects”

It is time to “Hack the city!”
The word of ‘hack’ ing does not mean the specific media oriented act in the computer science. It is not used in negative way which is stealing personal information without permission, either. Rather it is right to say that this word is chosen in the metaphorical context: critical thinking, reconsider of our social system and technology. If people think the place/space where they live, reconsider about the technologies which they use everyday like mobile phone, become unfamiliar with familiar things, then we can say that we are close to make the world what we dream.

This project is consists of two parts. First part is related with actual data which artists get from Seoul city such as traffic flow, sound capture and transfer, some official statistic data. For this TMCA collaborated with media lab in universities. EWHA Womans University and Chungang University join with
by Nathalie Boseul SHIN