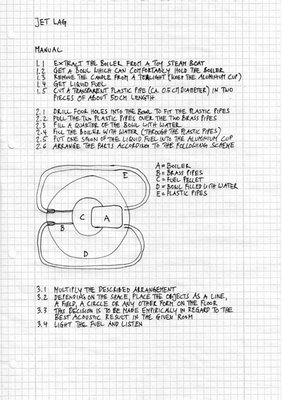 Boris is a good old friend from Bremen who studied composition in the Netherlands. Serge and Boris were running a nice guitar/computer-duo for serveral years. Lately they began to work with sound installtaions/performances involving all kinds of materials. Upcoming “concert” sounds very interesting.
See you on thursday!

the development of jet lag has been inspired by an early 20th century sewage works facility driven by a large steam engine. this facility is situated in prague and has been turned into a museum (ekotechnické museum) after the abadonment of service.

the jet lag objects are constructed of the following elements: film reel boxes as the main containers. boilers extracted from toy steam boats. plastic tubes extend the boilers outlets to provoke a higher resistance and slightly destabilise the functioning of the engine. tealight bins are serving as containers for liquid fuel which powers the boilers. > jetlag (mp3)