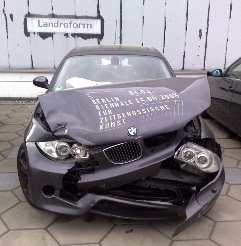 hehe, looking forward to take a ride in this carousel tomorrow …

In 1918, Irving Berlin penned the patriotic, “God Bless America”. Twenty two years later and considering Berlin’s lyrics unrealistic and complacent, Woody Guthrie wrote his own American anthem, “This Land Is Your Land”. The song celebrated the country’s land while protesting its class inequality. Now, 68 years later, we would like to bring this song in a roundabout route to this Berlin.

Eight BMWs, the sponsor of the bb05, drive in a slow perfect circle on one of the lots of Skulpturenpark. “This Land Is Your Land” plays on their radios. From outside, the song is heard as a melodic and muffled chorus. The circling cars create an image recalling a shiny auto display, a western wagon train, or an amusement carousel. Every few rounds the cars stop to pick-up and drop-off anyone who wants to go on its circular ride.

In Landreform, the banality of economic determinism drives in a circle around itself upon a ground which will soon be developed with luxury condos and office buildings. People are asked to join the ride. As sung by Guthrie, the land of Skulpturenpark is made for you and me.