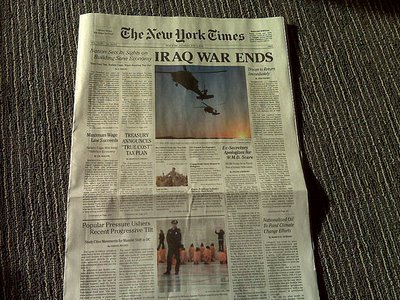 I enjoyd very much this big scale art activist project yesterday. And it is interesting to see how big the impact of printed paper is. It would be much more easy to setup a fake website but the effort of a fake mass printed New York Times affect people more fundamental and is absolutely woth it. Congrats, to all who were involved. Great job!
“SPECIAL” NEW YORK TIMES BLANKETS CITIES WITH MESSAGE OF HOPE AND CHANGE
Thousands of volunteers behind elaborate operation
* PDF: http://www.nytimes-se.com/pdf
* The New York Times responds: http://cityroom.blogs.nytimes.com/2008/11/12/pranksters-spoof-the-times/
Hundreds of independent writers, artists, and activists are claiming
credit for an elaborate project, 6 months in the making, in which 1.2
million copies of a “special edition” of the New York Times were
distributed in cities across the U.S. by thousands of volunteers.
The papers, dated July 4th of next year, were headlined with
long-awaited news: “IRAQ WAR ENDS”. The edition, which bears the same
look and feel as the real deal, includes stories describing what the
future could hold: national health care, the abolition of corporate
lobbying, a maximum wage for CEOs, etc. There was also a spoof site, at
http://www.nytimes-se.com/.