How to Win at Photography – Image-Making as Play explores the relationship between photography and play. It investigates the notion of image play, creating unexpected connections between the history of photography, the gamification of the visible as well as practices of image making with and within computer games.

The group exhibition How to Win at Photography includes more than forty positions from contemporary and 20th century photography. Through an assemblage of multimedia artworks and vernacular images, the exhibition questions the very meaning and function of photography today.

Are we playing with the camera or is the camera ultimately playing us? Are we really in charge or are we mere pawns in larger technical, social, cultural and economic networks? What can a playful photographer achieve on a political and socio-cultural level? Who and what is performing the act of seeing and capturing – humans, machines or a combination of both? Who is playing along? And finally, can this game be won? These are just some of the questions posed by How to Win at Photography.
The exhibition invites visitors to focus on the playful aspects of photography. The exhibition looks at artists and photographers who play with – and sometimes against – the camera, document the environments of videogames and question the notion of identity, gender and class.

In collaboration with the Lucerne University of Applied Sciences and Arts and the Centre for the Study of the Networked Image at London South Bank University.

New Viewings is an experimental exhibition platform, a utopian space, a generator which invites curators and artists to develop projects free from limitations. Visitors get an overview of current discourses, curators and artist positions. Browsing through the ongoing carousel of shows and works you can discover and buy from upcoming and established artists as well as commission new projects. New Viewings was founded by Galerie Barbara Thumm. Although this project was inspired as a response to the pandemic lockdown, New Viewings has matured into its own destination. New Viewings has become a pioneering platform which explores new modes of gallery presentation and new ways to create market access. It has created a diverse network of artistic positions and ideas. The gallery has invited curators to host a series of four solo shows. A virtual gallery space was provided as a blank canvas to the artists, inviting them to experiment, to test new ideas. It is an opportunity to the artists to create a presentation of their work that would either be impossible due to resource constraints, gallery spaces or even strategic confines as determined by expectations of that artist’s oeuvre.

Red Brick Art Museum will present Le supermarché des images on May 28 thanks to the efforts of Chief Curator Peter Szendy, professor of Comparative Literature and Humanities at Brown University, and assistants Emmanuel Alloa and Marta Ponsa. 39 artists and groups will participate and offer over 50 works using a variety of media, such as photography, painting, sculpture, videos, and installations. Artists include Maurizio Cattelan, Yves Klein, Andreas Gursky, Robert Bresson, William Kentridge, Sophie Calle, and Kevin Abosch, the last being an NFT artist who has recently found himself standing in the limelight.

The theme is inspired by the concept of “iconomy” that developed in Peter Szendy’s 2017 book Visible Supermarkets: The Universal Economy of Images. Living during an era marked by image overproduction, he sought to explore a new way of understanding these icons. It was more appropriate than ever to ask questions about the economic importance of images and their storage, velocity of circulation, component materials, and fluctuations in value. how to represent economic processes that often escape our mind, and how to think about the image from an economic standpoint. In short, how images have become a new form of capital.

In concert with the “supermarket” metaphor, the exhibition discusses five image-based perspectives: “Stocks, Raw Materials, Work, Values and Exchanges”. The event aims to take a keen look at the profit and loss of the image economy and shall present current hot topics including the abuses of images, internet giants and their fingers in every pie, the protection of personal information, “micro jobs” and digital labor, and cryptocurrencies. Those are the “bricks” that we use to construct the world we live in today and our modern lifestyle which undergoes reshaping and changing.

As part of the 15th Le Festival Croisements, Le supermarché des images (The Supermarket of Images) is organized by the Jeu de Paume and the Ambassade de France en Chine, with the support of the Institut français de Pékin.

Thinking landscapes: Beyond a framework

The Artist Is Online

… the announcement below is stolen from the [DAM] Berlin website. Expect a couple new pieces, exclusive offline art for the opening!! (… to be published online soon after), lots of DIY and the ARAM BARTHOLL book launch!! I am very excited about all this, hope you can make it!! CU in 2 weeks !! 🙂

Gallery [DAM]Berlin presents Berlin based artist Aram Bartholl (*1972, Bremen) in his first solo exhibition, whose works create a dynamic tension between online- and real-life. In 2011 Bartholl was partaking in exhibitions by MoMA, Pace Gallery New York and [DAM]Cologne.

His pieces are cutting-edge – not just product of observation, but formed by thought-provoking impulses that Aram gives and by the subsequent independent existence of the artworks created by the user. His interventions in public space, his readymade-like installations and sculptures are based on a do-it-yourself-culture with regard to personal creation and responsibility as well as the Internet’s popular icons with whom Bartholl confronts us in reality. But Aram Bartholl’s artworks are not to be seen as entirely digital: they deal too much with space, are too haptic in their approach, and the awareness of potential political influence is too intense – his pieces push out of gallery and museum surroundings into the city space, into society.

Things, that seem to be trivial parts of the internet, irritate the viewer as soon as they confront him in the physical world: In Are you human? a CAPTCHA-code, used by web services to differentiate between human request and automated scripts, is applied in aluminium form onto murals and gallery walls. A screen with illuminating pixels turns out to be a hand crafted object operated by a candle. In a subtle but accurate way Bartholl reveals discourses concerning the power of a digitally affected world, e.g. in his successful, often quoted project Dead Drops, consisting of USB-sticks, mured into city walls, that refuse data exchange via the internet structures established by big global companies.

‘Everything develops extremely fast on the net. I have the urge to create something that deals with the topic, but that endures anyway,’ says Aram Bartholl about this de-digitalisation of the digital. Where media art, urban intervention and interactive performance meet he asks basic sociocritical questions, thinks about our cultural memory. The rapid development of the digital age is slowed down in his artworks, it is liberated of its technological appeal and exposed for intentional examination. For example his new project Dust: Bartholl wants to convey the worlds most played computer game landscape from Counter Strike – a virtual space, a place seen by millions of people that is fixed in their visual memory even though they were never able to really ‘enter’ it – into an accessible 1:1 model made of concrete.

With the performance and installation shown at the exhibition for the first time, Bartholl, who is active in net political circles like the Chaos Computer Club, turns towards the symptom of an already existing frontier crossing of digital and analogue world: The Anonymous-movement and its characteristic comic-inspired Guy-Fawkes-masks, that are its distinctive mark and protection of identity. They have gained huge media presence thanks to the civil movement Occupy Wallstreet as well. The Anonymous-movement pushes forward the idea of a free, net-based information- and creativity-collective – a kind of global brain, that develops political capacity to act without hierarchic organisation and without determined identity.

The exhibition ‘Aram Bartholl. Reply All’ is part of the associate programme of Transmediale 2012. 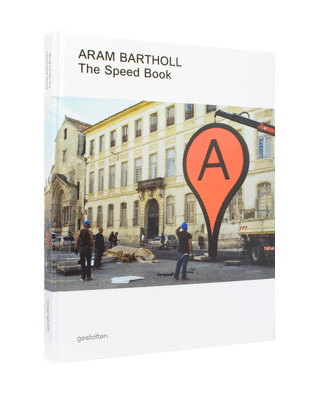 Aram Bartholl’s work explores the power structures, the social systems, the cultural innovations, the inner dynamics, the languages, and the products that are shaping our age. This first comprehensive monograph offers entry to an oeuvre in which space and cyberspace mingle and mangle each other, a realm that uses as little technology as possible while still speaking a digital language.
Aram Bartholl: The Speed Book features savvy experiments with transitions from the virtual to the physical: USB sticks embedded into walls, buildings, and curbs; giant real-life versions of Google’s red map markers positioned in public spaces; portraits generated from search results. An introduction by editor Domenico Quaranta as well as essays by science fiction writer Bruce Sterling, art critics, and fellow artists guide readers through a wonderfully skewed version of reality under the influence of the internet, something Sterling refers to as Bartholl’s “self-created twilight zone.”

More About This Book

For a growing number of people, virtual activities on the internet are becoming more significant than the lives they actually lead in the real world. Others are skeptical or even alarmed by the seemingly inevitable technological developments in our digital age. In his work, Aram Bartholl investigates this dichotomy and the blurred dynamics in between with a playfully ironic ingenuity.
This first comprehensive monograph offers entry to Bartholl’s entertaining art in which space and cyberspace mingle and mangle each other—a realm that uses as little technology as possible while still speaking a digital language.

Aram Bartholl: The Speed Book features savvy experiments with transitions from the virtual to the physical: USB sticks embedded into walls, buildings, and curbs; giant real-life versions of Google’s red map markers positioned in public spaces; portraits generated from search results. An introduction by editor Domenico Quaranta as well as essays by science fiction writer Bruce Sterling, art critics, and fellow artists guide readers through a wonderfully skewed version of our society under the influence of the internet, something Sterling refers to as Bartholl’s “self-created twilight zone.”