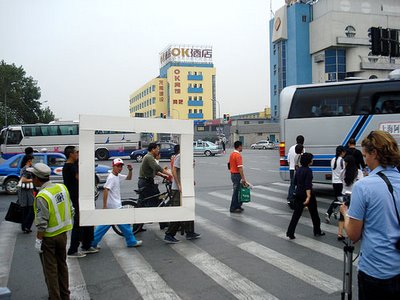 V2 Lab Rotterdam invited Daan Roosegaarde and me to run each a four day workshop track during the eARTS festival Shanghai 19.-22.10.2008. The title of the workshop setup by V2 was „Urban Space. Time to Play.“ The idea was to develop with chinese students a work wich would be presented in public space at the end of the festival. During these 4 days we had a lot of lectures, introductions and discussions. The students came from different schools of Shanghai and had different backgrounds, but mostly design and media design. After I introduced my style of work and a range of materials the Students were invited to develop their own concept. After four intense days of working, discussing, translating and testing my workshop track resulted in two different public space interventions. „Jump’n Run Shanghai“ and
„QQ PaperChat“. Although the police intervened and we had to stop our public action we had a lot of fun and lot’s of reactions from the public audience.
I think it was for all of us (especially eARTS) quite an experiment to do this kind of public intervention in China. The people in the street were very curious and totally not used to it. I was told Shanghai plays a special role in China (yes, the city is quite special 😉 and that it was not possible to do these kind of interventions i.e. in Beijing. But let’s just try. 🙂 There is a lot to learn about China. There are of course strict rules in this country but it seams to me that these rules are quite flexible (to a certain extent). I got quite different feedback from chinese people on how they rate what you could or could not do in public space. Let’s join them to work on that and to extend that fuzzy border … 😉
Thanks to all the participants. You were a wonderfull group and I hope you had a good time.
Thanks to the eARTS team: especially to Iris Huang, Xuan Xuan and Chen.
Thanks to V2 Lab: Michel, Simon, Anne and Alex.
I had a very good time and I am looking forward to learn more about Asia. 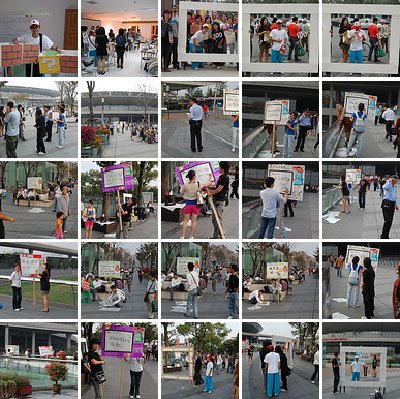 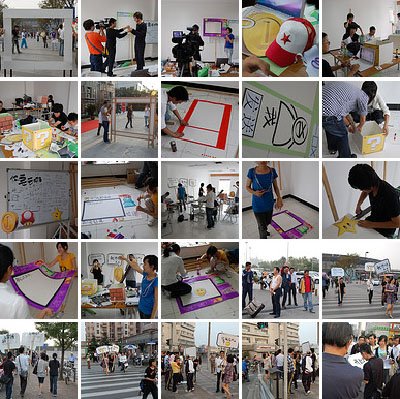 All pictures on flickr.
Picture on top by Simon, thx!
His set also with pics of Daans workshop.

„Jump’n Run Shanghai“ is an adaption of the video game Super Mario reenacted in front of the South Railway Station Shanghai on 22.10.2008.

„Jump’n Run Shanghai“ and „QQ PaperChat“ movies are as well online on Youku.com the Chinese Youtube