In the past two months there has been again a lot of international press about DeadDrops. The DeadDrops project is running since November 2010, for four and a half years now. After the initial press buzz in 2010/11 the project kept spreading online with occasional press like after the Snowden releases etc. But just since the beginning of 2015 there was a lot of press all over again. It is really hard to tell how such a press wave is starting on a project which is already running for such a while but I assume after almost 5 years there is a new generation of Internet users and press people who haven’t heard about DeadDrops yet. Through some big blogs in the US it reached the south american news, spreaded there and also made it back to Europe.  I ve listed a selection of press links at the end of this post. Please also see the nice DeadDrops youtube playlist somebody made.
In Germany the recent reports about DeadDrops had a special twist. End of February the yellow press style news paper Kölner Express had a piece about a bomb making plan PDF which was supposedly found on a DeadDrop in Cologne. The local and national press picked up quickly the story and my phone kept ringing for two weeks. It is astonishing how in 2015 you still have to explain to people that it is of course not a problem to find such a PDF with illegal tutorials on the Internet. Or yes! there could be a virus on the USB drive, like there could be a virus in this blog post. But in an era of constant fear about terror the suspicious USB drive in wall was a perfect story for them. I was only waiting for the ISIS connection. But again this was a good opportunity to explain that there is no use in censoring or prohibiting encryption or anonymous communication technologies because there is illegal activities. Like back in the days the ruling class tried to banish the brand new dangerous technology ‘book printing’ which radicalized all the young people. Especially journalists should be aware how important independent, encrypted, private communication is. In fact DeadDrops is not a very efficient communication technology but a good symbol on independent, open digital communication. So while the NSA has trojans installed on all our hard drives or access to millions of sim card keys we worry about a 20 year old anarchist cook book PDF on a flash drive in a wall in cologne.  What a crazy world! :))
The actual great story about the Cologne DeadDrop is that this specific DeadDrop, which I made myself as part of a duo show with JODI at DAM Cologne in 2011, was still existing and working in 2015!! Until the police ripped it out and broke it to then hand it in at the at the LKA cyber security department to get it fixed. Of course the highlight is how the two police men are kneeling in front of the yellow banana (the gallery “certificate”) trying to understand what’s going on. In fact later the Kriminalpolizei called DAM gallery to have them explain what exactly this USB stick is about and what the DeadDrops project is etc. On the same day I made this popular tweet about the whole story.
Of course I am very happy about all the attention for DeadDrops. It is very interesting to witness how the perspective on such a project has changed over the past five years, especially since 2013. I am glad to see how this project is still going on and how it has inspired so many people over the years. Thanks to all the deaddroppers out there!! You are awesome!!
Aram Bartholl, March 2015 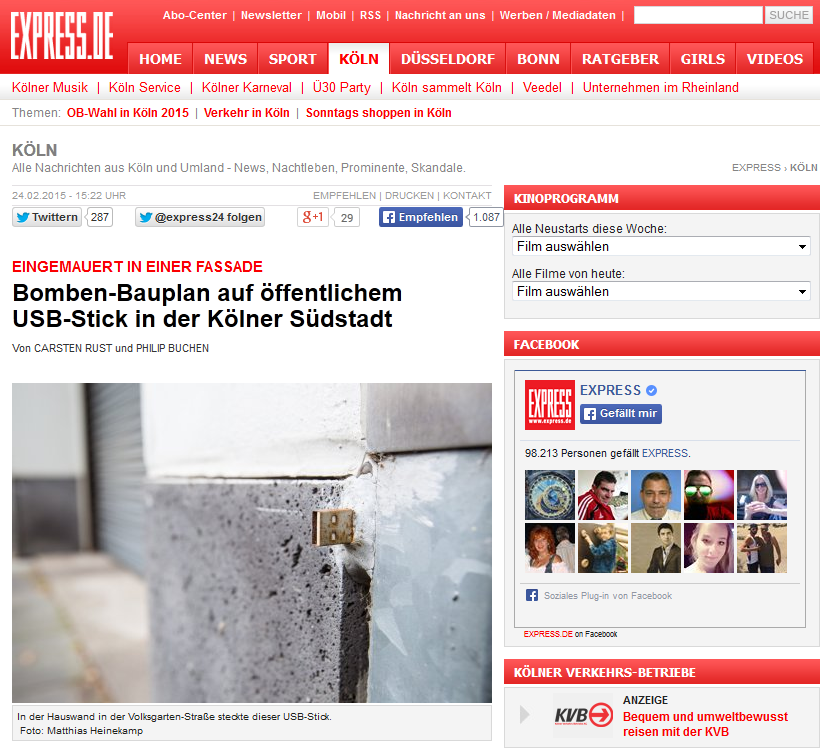 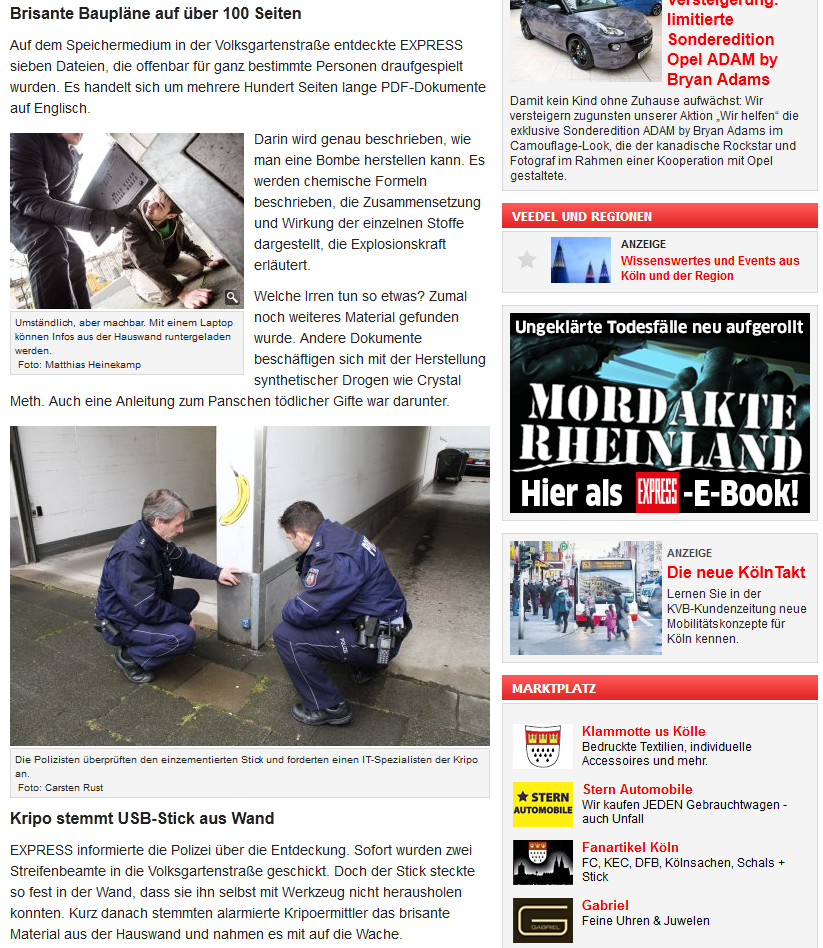 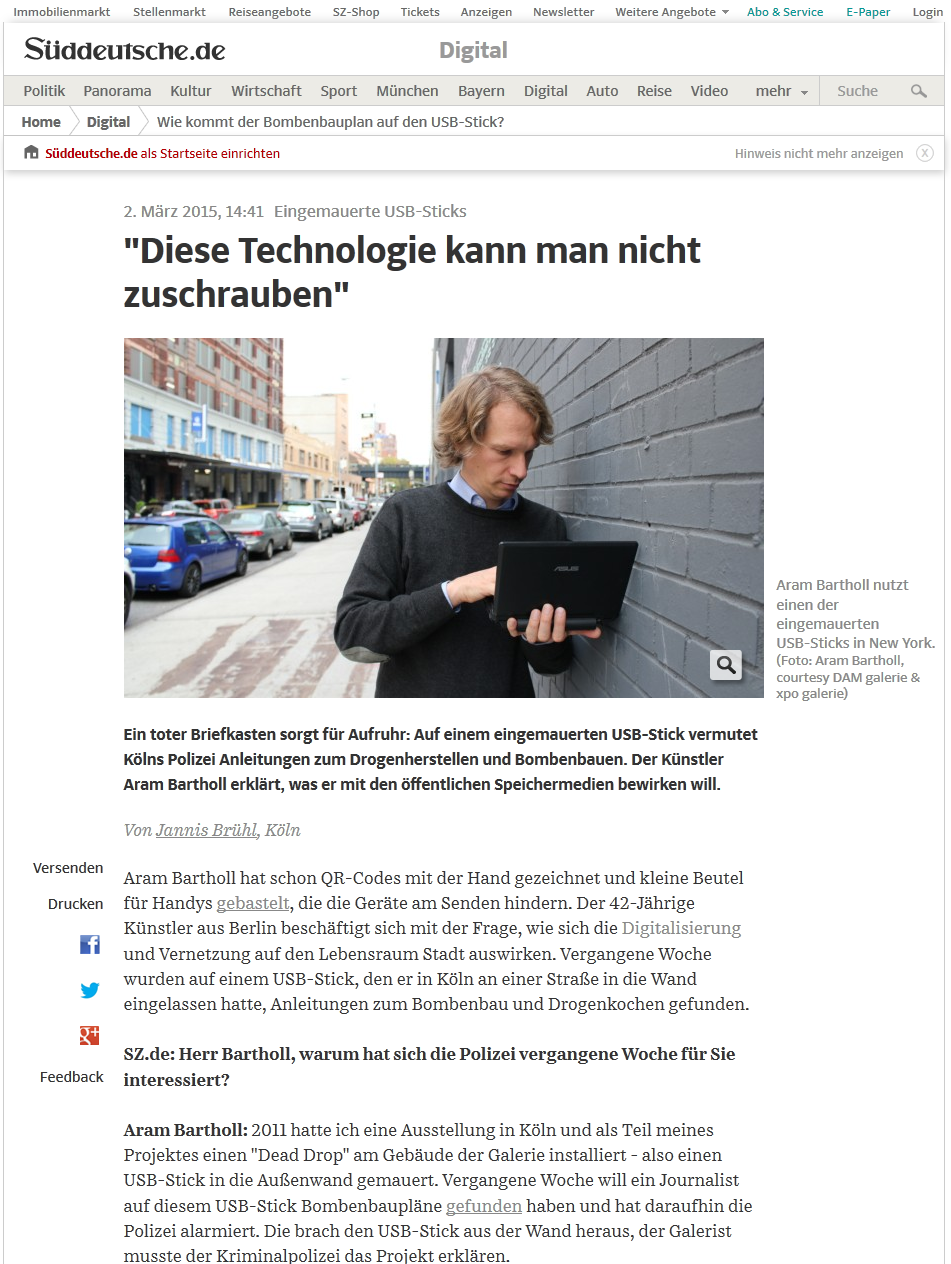 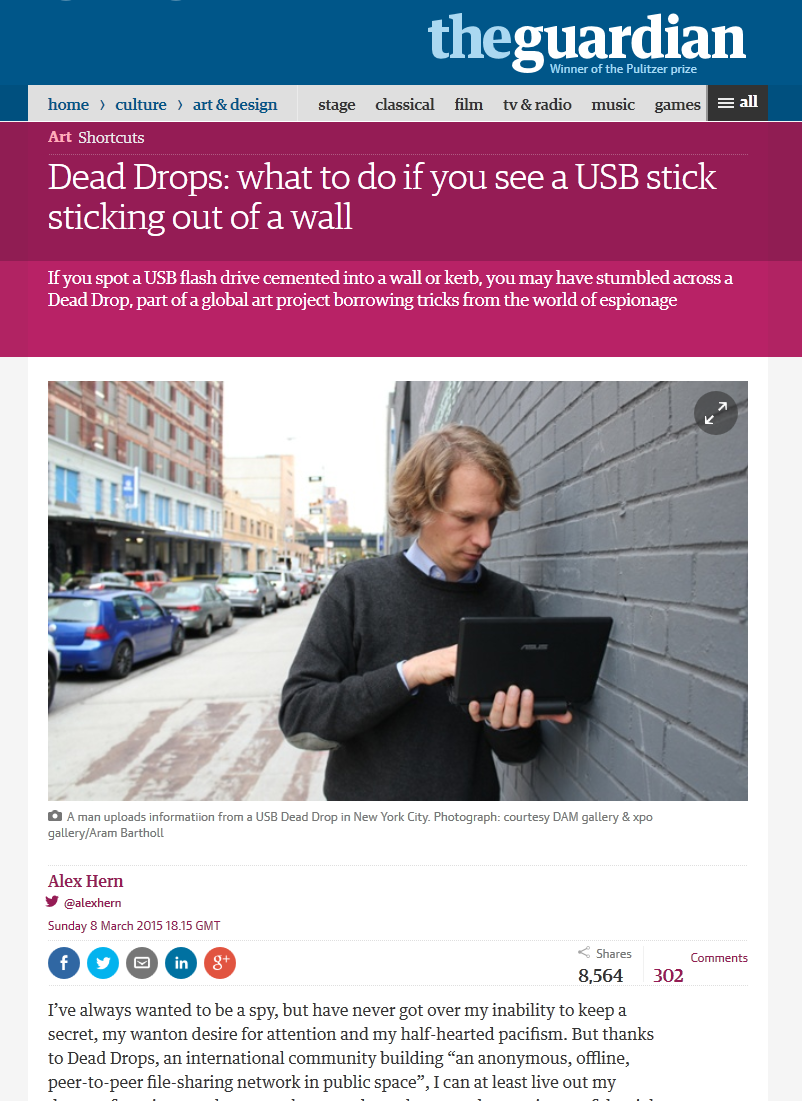