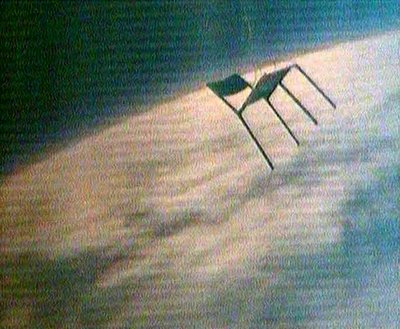 I had a great time last weekend during our ‘Performing Spaces’ workshop at Castle Bröllin. It showed that Anette and Miles had a very good hand in selecting and combining artists for the upcoming project. In the beginngin all of us introduced ourselfes and presented our work.

Simon Faithfull did show a video of the live event “Escape Vehicle no.6” one of my favorite pieces on that weekend. It is just amazing. I’ve often seen movies of cams mounted on a small rockets or similar filming from above. But having this plain chair ascending in almost earth space view is just hilarious. (The whole journey took about 90 min. he says)

Escape Vehicle no.6 started as a live event developed from the previous balloon film 30km. The live audience first witnessed the launching of a weather balloon with a domestic chair dangling in space beneath it. Once the apparatus had dissapeared into the sky they then watched a live video relay from the weather balloon as it jouneyed from the ground to the edge of space (30km up).

Now presented as a non-live video work, the footage shows the chair first rush away from the fields and roads, ascend through clouds and finally (against the curvature of the earth and the blackness of space) begin to disintegrate. The chilling nature of the film is that the empty chair invites the audience to imagine taking a journey to an uninhabitable realm where it is impossible to breath, the temperature is minus 60 below and the sky now resembles the blackness of space.