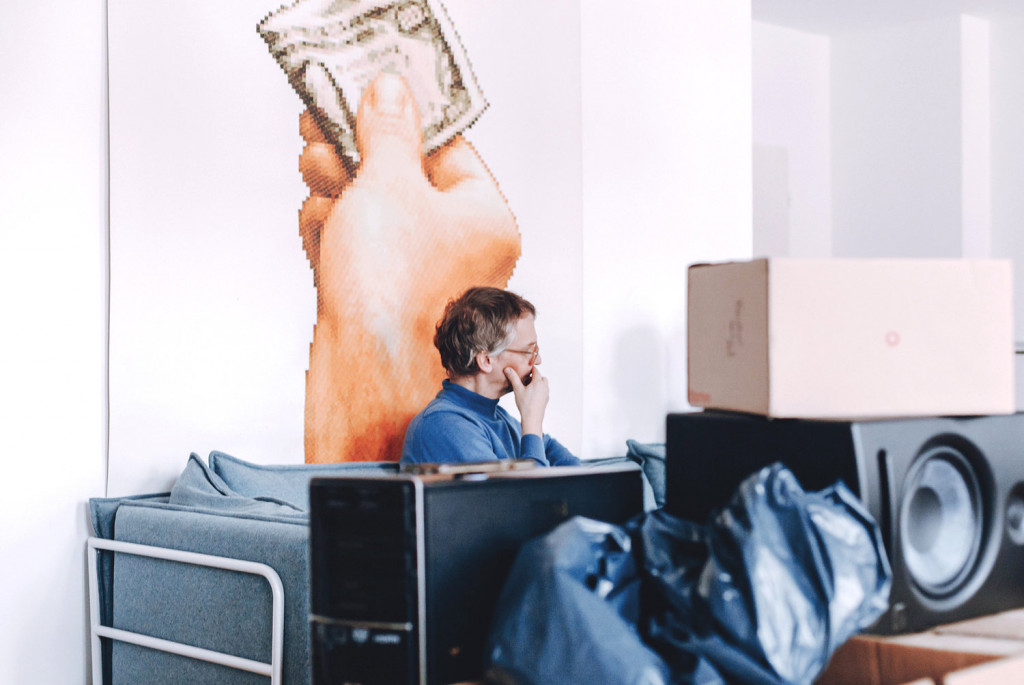 With a wry sense of humour and a lightness of touch, German artist Aram Bartholl subverts the symbols and functions of the internet to draw our attention to its darker side. Through his prolific output of installations and performances around the world – from the beaches of Thailand to the Strasbourg Biennale – Bartholl dissects the back end of new media, shedding light on the capitalist imperatives that have come to dominate and track our every click and tap. How can we navigate the current – and future – digital landscape without lapsing into disillusionment, or relinquishing our agency as internet users? Ahead of his upcoming show at SMAC in Berlin, where he lives and works, Bartholl shares his take on surveillance capitalism, selfie culture, and what to expect at his new exhibition [hint: there’s a disco ball.]

SMAC: Your work acknowledges the vast possibilities presented by the internet while altering us to the pitfalls of its ever more commercialised reality. What should we be most concerned about?
Aram: I would point to questions of privacy or personal data, as well as how platforms work. We need to acknowledge that Google and Facebook are purely advertising companies. There are a lot of concerns. One thing I’m thinking a lot about is how we can escape the current monopolisation of the internet. The web of the ‘90s was very vibrant and diverse. It started as a user-driven, non-commercial space. Over time, many companies and start-ups employed it to achieve their commercial goals, and today we have five or six huge companies, with whom no-one can compete. They probably need to be broken up at some point – this is likely to come from the US.

How would you characterise your own internet use?
Aram: I try to avoid the big players by using an Android phone without Google on it, for example, having my own NextCloud servers at home, by avoiding Dropbox, and not ordering on Amazon any more. I try to be conscious of where I leave my data. At the same time, I use Twitter and Instagram. Most of my online input comes via Twitter. I depend on it, though it frustrates me. There’s a recipe for each – on Twitter you have to be negative to attract attention, and on Instagram you have to be positive, and post beautiful pictures. It’s very convenient to use all these platforms, but to be conscious about things is more complicated. I feel as though there’s a certain sense of fatigue with social media at the moment. Many people I know feel caught in between – it’s hard to leave these platforms, but people don’t want to be on them any more.

“ I feel as though there’s a certain sense of fatigue with social media at the moment. Many people I know feel caught in between – it’s hard to leave these platforms, but people don’t want to be on them any more.

Your work often employs tools of surveillance, such as surveillance cameras, in subversion of their purpose. Can the master’s tools dismantle the master’s house in this regard?
Aram: A surveillance camera is a valuable symbol because it’s a tool everyone understands. It’s an eye, it takes a pictures, it sends that picture somewhere else. Today it’s usually algorithms that scan them to look for, say, unusual movements. But then there’s what happens in your browser – tracking with cookies, for example, which no-one really understands.

Most people have a sense of what’s going on, but don’t feel like they can do anything about it. So I like to take these tools and use them in other ways – to have people re-think, question them. In my installation [“Pan, Tilt and Zoom”] last year [2018] I placed the cameras on the floor of the gallery. They were motorised, equipped with a tracking system they roll over the floor and seem helpless. People had other kinds of interactions with them, and hopefully questioned their purpose.

Does the right to privacy exist anymore? Have we eroded it through our collective obsession with self-surveillance – take selfie culture, and oversharing on social media?
Aram: There are two things at play here. Yes, a lot of people willingly share information on where they are and what they’re doing, but at the same time there’s this mass-scale surveillance – not in terms of the kind of government surveillance that [Edward] Snowden revealed, but rather commercial surveillance. When you walk around with your phone with the wifi on, it projects all the wifi connections to wherever you’re going. Even supermarkets have wifi tracking systems to see how you pass through the market or and when you return. We are already aware of this on a certain level – for example, when you go into a mattress store and get served advertising from them the next day. But it’s very hard to understand how this works. That happens on a very technical level, which seems very abstract to us. This is something we should be concerned about, as it’s a wild west out there right now. Companies can basically do whatever they want. Of course, since May [2018] there’s the [European Union] General Data Protection Regulation which is a first step towards regulation, but much more regulation still needs to occur.

“… it’s a wild west out there right now. Companies can basically do whatever they want. Of course, since May [2018] there’s the [European Union] General Data Protection Regulation which is a first step towards regulation, but much more regulation still needs to occur.

What can visitors to SMAC expect to encounter your upcoming exhibition?
Aram: “True Depth” refers to Apple’s technology for the iPhone X, which has infrared cameras implemented within the front camera. Whenever you look at the phone, there’s a infrared light dot pattern projected onto your face. Through measuring the distribution of these dots on your face, the software can build an actual 3D model of it. This is how facial recognition works. It’s convenient – you can unlock your phone just by looking at it – but its inner workings are invisible. For the show I have this disco ball, which represents disco – this fun, pop-culture, “let’s party” attitude, freedom. Then I have these two cameras. One projects infrared light onto the disco ball in a typical way, so dots of light are dispersed over the room, but the viewer can’t see them. The disco’s happening, but we can’t take part. The work is related to this phone technology, but it also relates to the commercial party that’s going on around us, tracking us, extracting information. All without any of it being visible to our eyes. Elsewhere in the gallery there will be the infrared view of the CCTV camera being streamed on a screen, so you can see the dot patter and get the view from the other side.

Then we have the webcam privacy screen. I saw it online and liked it very much as a sculpture – this round screen which attaches to the back of a chair. These screens are made for being on a webcam in front of a neutral background. They’re advertised as being good for business, with a blue or green background allowing you to look more professional – and you can also key out the colour and replace it. I’m interested in the simultaneous acts of looking at a screen and filming yourself while hiding what’s behind you. The process is similar when it comes to selfie culture. You see this often in the street – young kids taking ten or twenty just to get the right one. It’s very deliberate. It all ties in to the presentation of the self in a digital space, and how we cut out the noise and the background of our lives in the way we film ourselves.

This theme was explored in your recent work for the 2018 Thai Biennale, “Perfect Beach”. What sparked the idea for this work?
Aram: People fly to Thailand to find the perfect tropical beach, ones which are advertised all around us but also embody our collective idea of paradise. The empty beach has always been a symbol for freedom. The performance at the Biennale involved two performers carrying a big screen featuring an image of an idyllic beach across an already perfect beach. I was interested in confronting tourists with the question of why they went there. Because, of course, it’s never empty when you get there. Many people wanted to stand in front of the beach screen and take a picture – we’re so programmed to do that. I was hoping that would happen, but was amazed by how well it worked. But of course there were also people who were annoyed by it [laughs].

“I’m interested in the simultaneous acts of looking at a screen and filming yourself while hiding what’s behind you. The process is similar when it comes to selfie culture.

You’re currently presenting three works at the first Strasbourg Biennale, the theme of which is “being a citizen in the digital age”. What can visitors expect to experience when viewing your art there?
Aram: One work is part of the series “Are You Human?”, which is all about captcha codes. These used to be a string of characters we had to type in to prove that we’re human, but today all this has been replaced by the Google reCAPTCHA test. It has the same function, but we have to select these images, like ‘select all the cars’ you can see in the picture. On one hand, the purpose of this is to train Google’s self-driving cars, and on the other, to prove we’re human. The installation consists of this big code on the floor with twisted characters made from steel, and the reCAPTCHA prints on the wall. I’ve swapped in pictures of European borders and spam advertising text to remix this whole idea of reCAPTCHA, while drawing attention to the issue of borders, access to space and digital services.

2018 saw a slow – and far overdue – global public awakening to the risks and dangers of social media, largely due to a series of hacks and privacy scandals. What will this lead to in 2019?
Aram: Next step would be to get out of our current situation of a monopolised internet, and to take back control over our own lives. To decide what we want to do with our data. On one hand, there are policy questions, then there’s public awareness, but there’s a lot more that needs to happen on that front. The recent [January 2019] data leak that affected German politicians and celebrities invoked a paranoid press reaction. Which is perhaps good – for people to realise that we’re vulnerable. Once your information is out there, you can’t get it back. What we’re seeing now, with the links between populism and social media, makes it very easy to feel dystopian about these questions. But let’s try and stay positive. We need smart people to sit down and craft new plans that will allow us to use technology in ways that will help us, not just make a lot of money for a few.

“What we’re seeing now, with the links between populism and social media, makes it very easy to feel dystopian about these questions. But let’s try and stay positive.