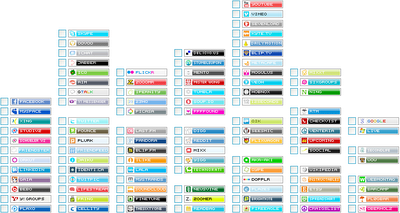 On next friday I’ll be showing my new performance piece “Sociial” at Weserburg Art Museum Bremen, DE. There will be a a new microbutton t-shirt, wii action and Kosmar will ‘explain’ 100 Web2.0 services in 20 minutes.

Speakers:
Ingo Clauss / Curator of the Weserburg
Klaus W. Becker / Film-Office Bremen
Dr. Wulf Herzogenrath / Director of Kunstahalle Bremen
Anouncement of the Video Art Award winner of 2008
Guided tour through the exhibition by the Curator Marikke Heinz-Hoek on 7.12. 11:30 am.

The Videokunst Förderpreis Bremen has advanced to become an important art prize. It is not awarded to completed works, but to concepts that the prize money makes possible to be brought to fruition. This is extremely important in the area of video art, as works of video art are frequently elaborate productions that cannot be realized without financial support in the first place. Within the scope of the competition, high-quality works on video have been being produced on a regular basis since 1992. Due to the Filmbüro Bremen’s keen commitment, this success story can continue be written this year as well. The works by last year’s recipients of the prize—Aram Bartholl, Maximilian Moll, Stephane Leonard—are now being presented for the first time at a four-week exhibition
The exhibition will open with Aram Bartholl’s performance Sociial, which features the games console Wii that Nintendo introduced to the market two years ago. One of the device’s special features is a novel interface between player and computer. Players are required to exert their full physical effort. Sensors register their movements and communicate them directly to the computer game. The in part ridiculous movements are accompanied by a lecture that is no less grotesque—in an endless litany, it presents the countless merits of online services. Facebook, Myspace, studiVZ, and all the other “social networks” are lastingly changing our everyday lives. Yet how social can software be? And what impact do digital developments have on the way we coexist? Against this backdrop, the insane contortions the computer game exacts appear to be thoroughly dubious operations.
Fire is the constitutive element in Maximilian Moll’s video installation Keep the fire burning. The artist uses several projections to set fire to the exhibition space, playing with the various qualities and meanings of fire. Whether forest fire or campfire, candlelight or blaze, humankind’s relationship with fire has always been ambivalent. Fire represents warmth and light, yet it can also escalate into a destructive force. A space-consuming dramaturgy has developed out of this field of tension. However, the digitally generated, in part apparently abstract images do not follow simple narrative patterns. They create a multi-layered resonating space in which personal memories are stimulated and connect up to the images of fire to produce a special form of aesthetic experience.
Stephane Leonard works as an artist, musician, composer, and filmmaker. In his multi-part video installation The Bridge’s Song, these areas team up in a singular way. One sees New York’s Queensboro Bridge. The impressive dimensions of the bridge, its enormous pillars are transferred into the exhibition space by means of a large-format projection. It is flanked by further projections that show the urban environment, the thunderous road traffic, skyscrapers, but also a view from a gondola slowly passing by the bridge. In an interplay with the sound level, the images of the city develop striking intensity. A complex audiovisual composition evolves from the background noises of the metropolis, the rhythm of the road traffic, in which even a bridge can release its very own sound: The Bridge’s Song.

The Videokunst Förderpreis awarded by the Filmbüro Bremen is made possible by the Senator of Art, the Bremische Landesmedienanstalt, Radio Bremen, and the artists association GEDOK. The names of the new award winners will be announced on the evening of the opening, December 5, at 7:00 p.m.