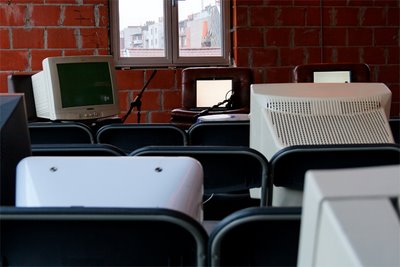 Wow, what a long title. But probably just the name of the file he is ripping with this nice installation. If you are around Brussels just take a look at this by machines reenacted conference before the exhibititon is closing.

“Remarks by…” is a re-enactment by computers of a conference on the evolution of computer technology and itʼs assumed benefits for the african continent. Originally taking place in Cape Town, south Africa, on July 11 2006, the conference features Mr. Bill Gates, Mr. Bill Clinton, Mr. Cheik Diarra, Chairman of Microsoft Africa and moderator of the talk, Ms. the Minister of Education of South Africa, a minister from Kenya, as well as three audience members asking questions.
The installation includes eight computers of different brands, generations and types, all comfortably placed on the chairs of a conference room. Each computer plays the role of one of the lecturers or audience members, speaking their respective lines with their generic synthetic voice. The words are heard through the integrated loudspeakers of the computers.
As a computer talks, itʼs screen flashes according to the rhythm of the voice, from black to white, respectively from white to black, depending on the skin color of the person speaking.
Throughout the 80 minutes loop of the re-enacted conference, the visitors may enter the conference room and take place on one of the free seats in order to listen to the speakers, next to the computers playing the roles of their fellow audience members.
As is usual in long lectures, some listeners ocasionally get sleepy. When computers get sleepy, their screensaver turns on. When this occurs for a longer period of time, soft snoring sounds might be heard.

(original transcript of the conference available at: www.microsoft.com/presspass/exec/billg/speeches/2006/07-11GLFAfrica.mspx)