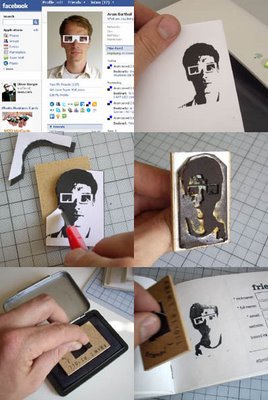 Thanks to Theo Honohan who did write an interesting essay on my latest project “Friends“.

Aram Bartholl’s workshop Friends actualizes the processes of abstraction and distancing which are involved in the construction of contemporary social networking websites. By turning these immaterial processes into physical action and representations, the work offers a critical model of current software practice on the web.
Under the general name of Web 2.0, social networking sites provide various facilities for publishing content on the web. In the case of Flickr, the content is images; in the case of Delicious, bookmarks; Last.fm, music playlists; Facebook and myspace, general personal information. The material published on these sites is often not particularly interesting to a general viewer. Its value consists primarily in the availability of information to friends. The ability to explicitly create links of friendship between users is therefore the central feature of these sites, and the feature from which the name “Social Networking” is derived.
Bartholl’s work, which could have been titled Friends?, calls into question the value and meaning of these explicit declarations of friendship. For one thing, the mechanical nature of the process gives it a simplistic quality. Two people are either friends or they are not, according to the system. This binary coding of relationships leaves no room for gradations of familiarity from intimacy to acquaintance. This initial observation is enriched by the level of detail into which the piece goes in representing the internal abstractions of a site such as Facebook. Each level of abstraction can be seen as a distancing from reality and the site of a possible slippage between image and actuality.
The process of creating a personal profile in the system begins with a digital photograph. This image of the user is transformed digitally into a black and white stencil. Affixing a printout of the stencil to a rubber stamp, the user cuts out the white areas to create a reusable stamp of their own image. In creating a reusable stamp, the work captures the infinitely reproduceable nature of a digital image. The image can appear over and over within the “site”, rather than existing just as a single original.
The creation of a profile continues with the preparation of a blank booklet for use as a register of friends. The booklet gains structure entirely through a series of rubber stamps which mimic the process of formatting a blank computer database. Data slots are created for name, email address and website, and a further grid of spaces is prepared to hold references to the user’s details on other social networking sites. The process of registering friends involves stamping, carbon-paper transfers, and the gluing of pre-prepared adhesive stamps into the “data slots”. The complexity of this process parallels the degree of indirection and formality involved in the software behind a social networking site, if not the experience of creating friends on Facebook. Bartholl, by calling attention to this complexity, illustrates the degree to which the information we share fits into an elaborate structure.
The process of adding friends to one’s personal profile is a reciprocal one; each of you ends up with a new page in the booklet showing the details of your new friend. The piece has another component, however, a central volume which includes a page for each user which records their friends (affixed as stamps) and pending friend requests (unglued stamps are held in a plastic pouch.) The analogy here is with a central database on a system such as Facebook. The whole graph of relationships is held in one place, rather than being stored in private, personall relations between profiles/booklets. This central volume is of course the way social networking systems are actually implemented, while the “peer-to-peer” architecture of the booklets, while offering potential advantages in security and privacy, has not been pursued (except, to a degree, in the case of Skype.)
The presence of a central database is a reminder of the industrial scale and automation of the process. Bartholls’ work problematizes the mass production of social contacts. While the concrete formal techniques of the workshop (sheets of repeated portraits) evoke images of an artistic practice such as that of Andy Warhol’s “Factory”, the abstract structure revealed by the development of a profile and network of friends shows the potentially dehumanizing nature of social networks. The choice of black and white for all representations produces an impression of direct simplicity but also unyielding control. The idea of a computerized social network, in the end, is a formalism, while social relationships are blurry, vital and inevitably exceed the terms of any fixed representation.
23 September 2008