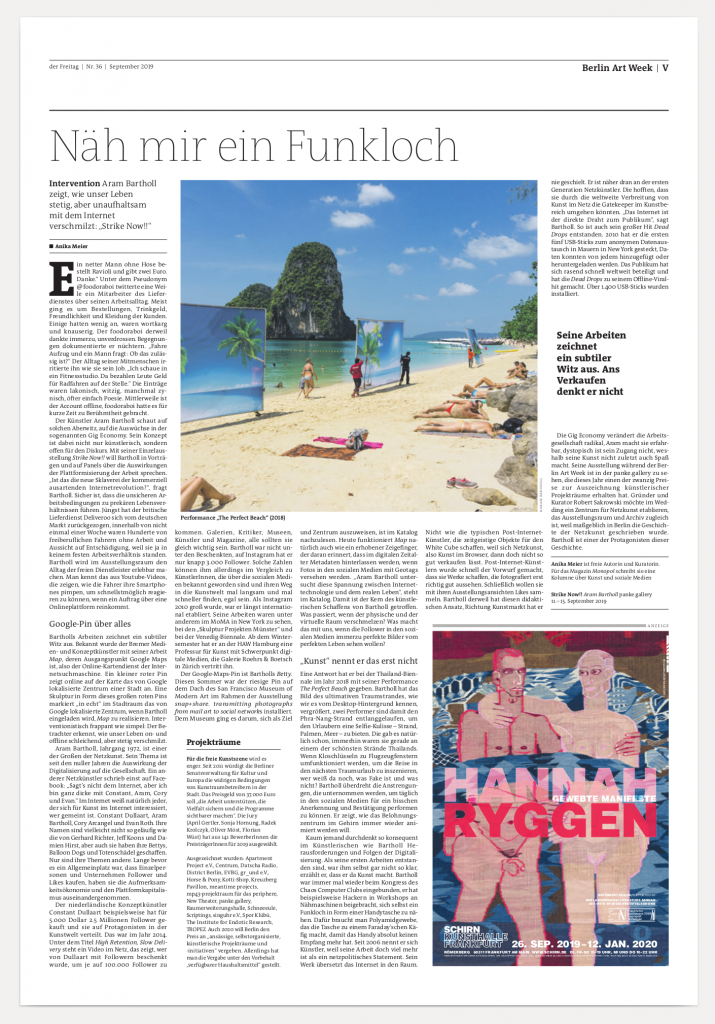 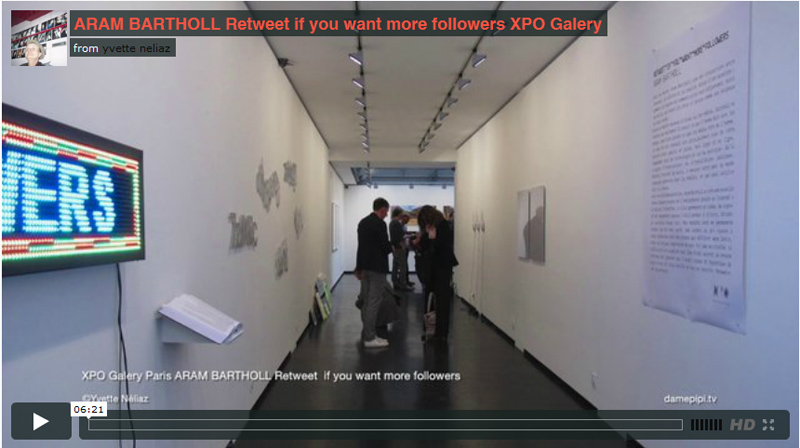 An interview I gave at the opening of ★RETWEET★IF★YOU★WANT★MORE★FOLLOWERS★ by Yvette Neliaz THX!!

Article by Max Schreier, photos by Chloé Richard in Berlin; Saturday, June 2, 2012
Aram Bartholl is a tech artist who makes objects by capturing electronic moments, developing them into classical forms, and using the most analog processes to create digital forms. His work falls into the avant garde not by its innovative methods, but rather by its means of handling the often difficult-to-tame medium of the Web. When I visited Bartholl in his studio he humbly downplayed how innovative his work is, choosing instead to discuss the more abstract ideas that inform his process. For Bartholl the duality of analog and digital is a false exclusivity; his art is digital in its concepts but analog in its presentation, an execution that sets him apart from many of his peers in the tech art world.

Bartholl moved to Berlin in 1995 to earn a degree in the architecture department of the UdK. After his initial two years of study he found himself more excited by the T1 connection in the computer lab than the plotters in the architecture studios. Unlike many of the programmers who were discussing the newfound wealth of information and visual possibilities of writing code to develop art, Bartholl was primarily interested in the front end of the Internet; the user experience with, and the presentation of, the aesthetic of the web. Instead of designing websites and becoming a student of online presentation, Bartholl started to observe the visual trends of the web and to interpret these tropes into handmade art works.

The openness of the Internet is integral to the physicality as well as the philosophy of Bartholl’s work. He posts detailed instructions for the recreation of his works online, and some of his works are the instructional videos themselves. While many of Aram’s works question where the inherent value of an artworks lies, that is not the primary intention of his creations. Posting the intricacies of the work to the Internet is “obvious” to Bartholl; the fact that his work exists in three dimensions and in space, does not preclude it from also having the interactive and open elements that are intrinsic to the web. Just as an artwork posted on YouTube is viewed thousands of times, a physical work of Bartholl’s also has the same accessibility. It is this well-established openness along with the content that sets him apart as such a unique web artist.

The ubiquitous conversation of how the Internet decreases our attention spans and thoughtfulness is universally accepted and derided, while at the same time we all participate in this perceived decline. Bartholl sees this haste as opportunity, creating Speed Projects — time restricted art events, self-monitored and self-approved — that are assigned their artistic merit by their completion and often uploading to the web. Bartholl calls these small works “freeing”, as he also considers the brevity of online media. Often he will work months on a work that is only appreciated for a second on the web before it is clicked through, and steadily decreases in viral significance because it is no longer new. The response is Speed Projects, some of which pick up Internet steam and find themselves trending on various forms of social and real media, and others that fall away as quickly as they were made.
Aram Bartholl is showing his work Online Gallery Playset at the group show, 404 Not Found, opening on Friday, June 8 at Berlin project space, Sur la Montagne. 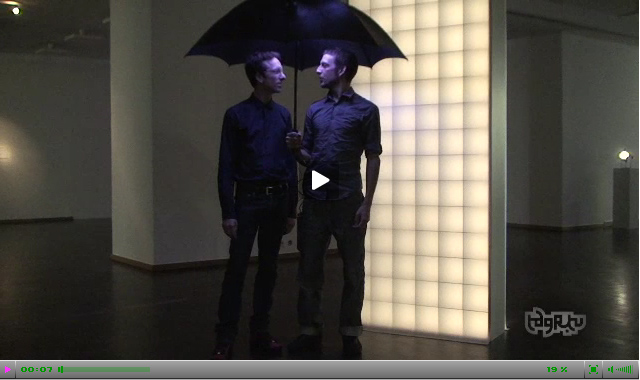