How to Win At Photography

The Glass Room MOD
The Glass Room is a public intervention that aims to educate about technology. With a sleek tech shop vibe, visitors can freely and critically discuss their relationships with data privacy.

Having toured Europe and the US, it will be visiting Australia for the first time in 2022.

From the tech boom to tech backlash, our understanding of the digital has become both deeply personal and deeply political. Our desire for convenience has given way to questions about the trade-offs for how much we can control our data and our understanding about how it is used.

The Glass Room is a place to explore these ideas. The objects here bring to life the hidden aspects of everyday technologies and examine how they are changing the way we live. The objects in The Glass Room provide unconventional and unexpected ways of seeing your relationship with your data.

As technology becomes embedded in every part of our lives, The Glass Room helps you look deeper into the digital: Does your personal data say everything about you, or is it an imperfect portrait? Do more tools, apps, and information make us better and more efficient, or are we giving away more than we want in return? What goes on behind the screens and inside the black boxes of the devices we interact with everyday? If we knew, would we still sign in or click ‘I agree’? How much trust do users invest in big tech companies, and what can be done if that trust is broken? If you want to learn more, you can visit our Data Detox Bar to pick up our Data Detox Kit, which offers you simple tips to enhance your digital privacy, security, and wellbeing.

From September 15 to 25, the Uferhallen will present the group exhibition On Equal Terms.

A large majority of Berlin-based artists are trying to resist the eco‐ nomic displacement of spaces for artistic experimentation. However, their language is sometimes forced to conform to a similar logic, as workplaces and artistic networks are labelled as “creative hubs” and “cultural capital.” In the struggle against the gentrification of spaces for living and working, these same spaces necessarily become subject to the cultural economy’s valorization process. What is the price to pay for entering the political bidding war for space? What is the relationship between cultural and monetary capital? Are both sides of the conversation on equal terms?

The group show examines, among other things, how art deals with mechanisms of the partly voluntary, partly forced commodification of cultural and artistic values. The exhibition will showcase works by approximately 25 artists from Uferhallen

In the series HMKV Video of the Month, HMKV presents in monthly rotation current video works by international artists – selected by Inke Arns”

TOP25 is a series of short 3D animation sequences featuring the 25 most used passwords in the world. Standard, easy-to-guess passwords like ‘123456’ or ‘admin’—frequently the default preset passwords for routers and other devices in the past—still pose a significant security threat to computer systems in general. This collection of well-known passwords is presented in a style of 3D animation often used for YouTube intros. It is very common practice among YouTubers to use short and very to-the-point 3D animations of their logo and name to introduce their channels, and a whole scene of young YouTubers exchange and share the 3D source files (Blender 3D) online to help new channel producers generate their own intros. Though the animations are remixed and altered, the general aesthetics follow a very clear visual concept. All sequences in this video are original designs and arrangements by different creators; the text has been altered to match the top 25 passwords.

UPDATE: Awesome opening yesterday night!! Thx to everyone for showing up! Thx to all the artists participating in this show!! & thx to xpo gallery making this possible!! Full press release and descriptions of the works below. More documentation to come! 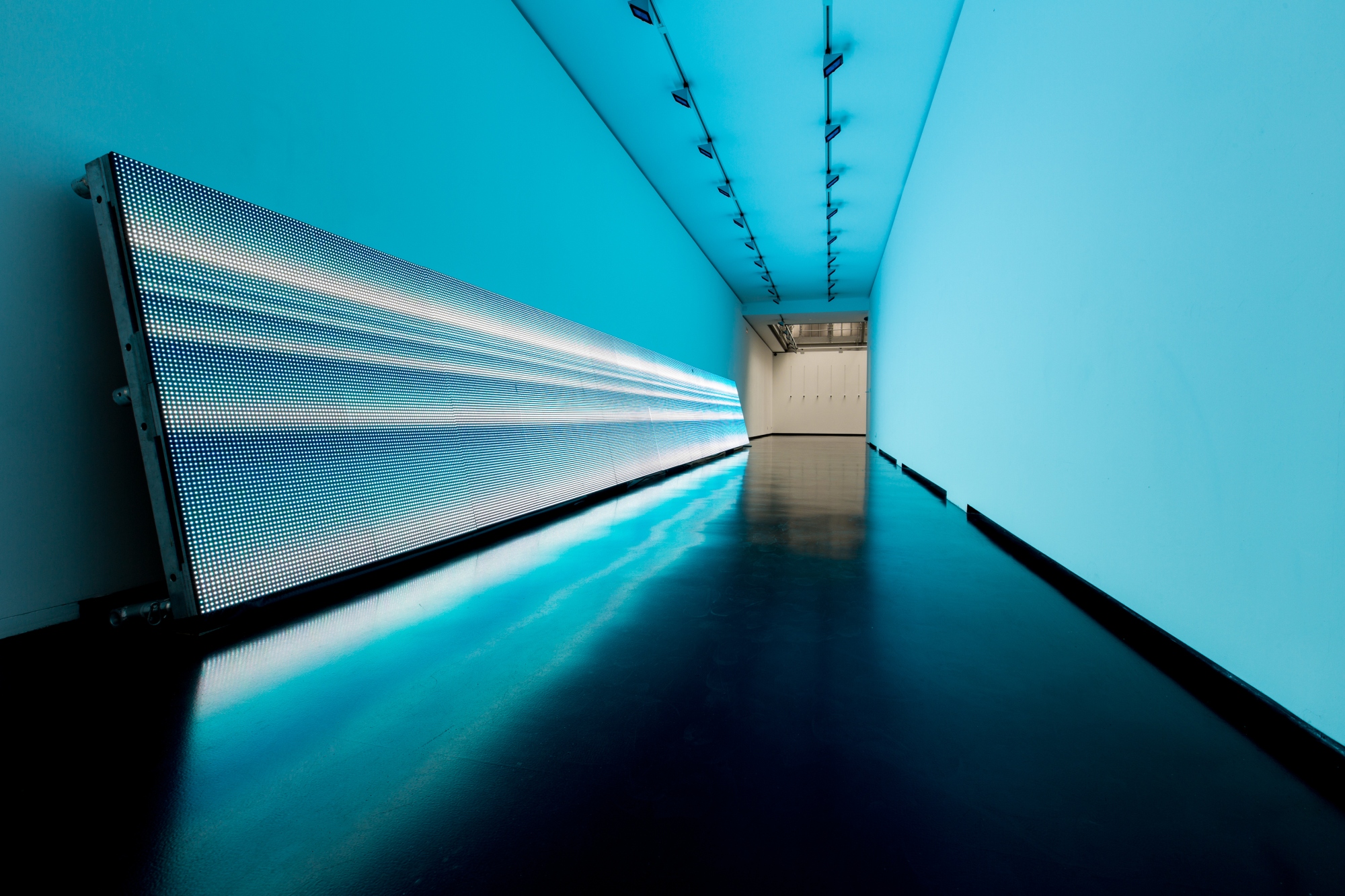 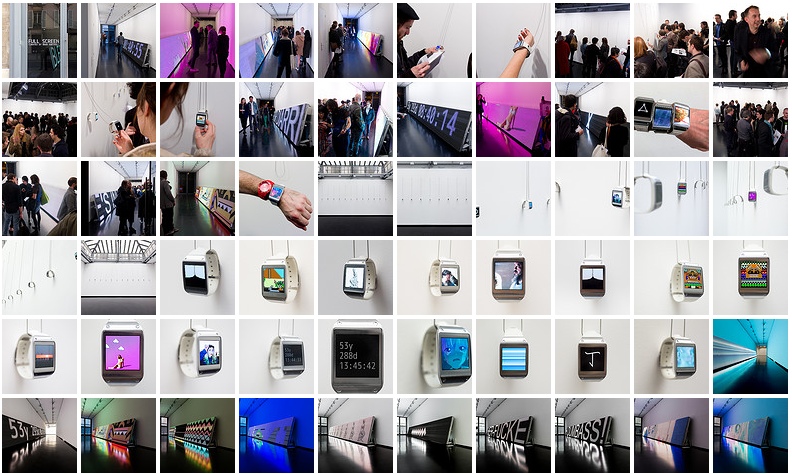 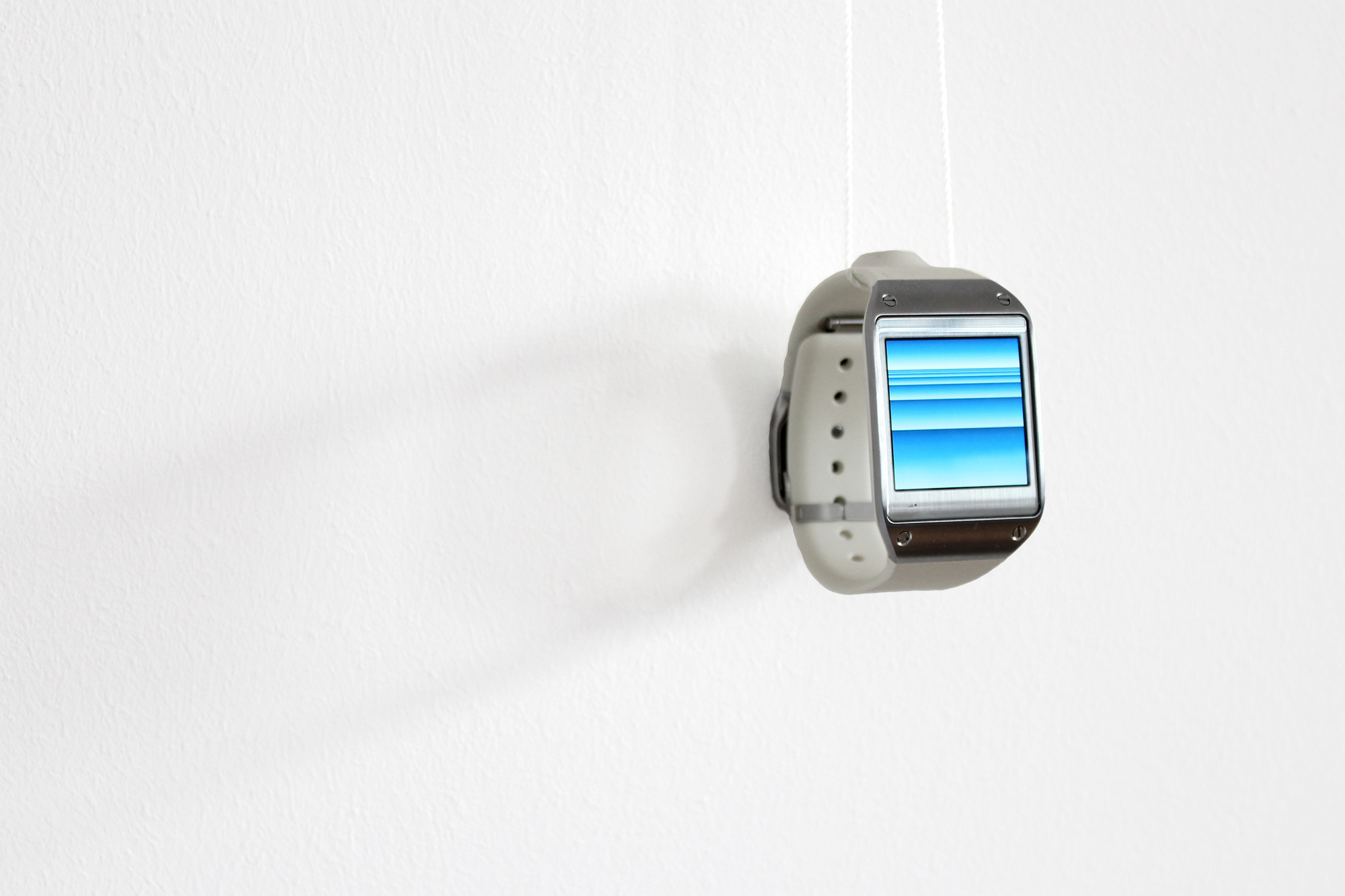 Rafaël Rozendaal,  2013, everything always everywhere .com website, courtesy xpo gallery
FULL SCREEN
Wear art on your wrist! A group show on very big and very small screens!
‘What time is it?’ – ‘It’s art!’
FULL SCREEN celebrates the evolution of the screen in its most extreme developments. Soon screens will disappear from physical view and will be replaced by laser light projected directly into the eye’s retina. Pixels crammed into a rectangle will soon be considered history just as a medium like oil painting is history today. For this exhibition, twelve internationally renowned artists have produced screen-based artwork to be shown on the screens of 12 small smart watches and one large LED screen. Now is the time to go FULL SCREEN!
Each watch contains a single art piece. The common function of the watch has been replaced by an artwork. Visitors to the gallery are urged to ‘Wear art on your wrist!’ and try on the watches themselves. In juxtaposition with the high-resolution (320 x 320px, 275ppi) screens of the watches, a ten-meter wide low-resolution (816 x 96px, 2,54ppi) LED screen spans the wall leading into the exhibition space. This bright, massive screen will display artworks referencing each of the pieces on view on the small watch screens.
Despite the current hype about wearable devices, the latest designs of smart watches feel incredibly dated, as if digital watches of the 80’s have come back in style. The same seems true for giant LED displays that are aggressively bright but very low in resolution, as if desperately trying to seek contact with the viewer. Over the years, the prime dimensions of screens have changed from small, to big, to small again – increasingly moving closer and closer to our eyes. Most importantly, recent developments in digital screen technologies suggest an imminent extinction of the use of physical screens, bringing a sense of urgency to the important questions that the creation and use of digital screen based artworks pose. Let’s celebrate the good old screens as long as we still have them! Let’s celebrate the new retro in a time when society comes to realize its impending digital metamorphosis. ‘Excuse me, but do you have the time?’
Curated by Aram Bartholl
Opening March 13, 2014 Save the date!
March 13 – April 4, 2014
XPO gallery, Paris
Participating artists:
Vincent Broquaire,
Jennifer Chan,
Petra Cortright,
Constant Dullaart,
Oliver Laric,
Sara Ludy,
Raquel Meyers,
Evan Roth,
Rafaël Rozendaal,
Paul Souviron,
Addie Wagenknecht,
Ai Weiwei 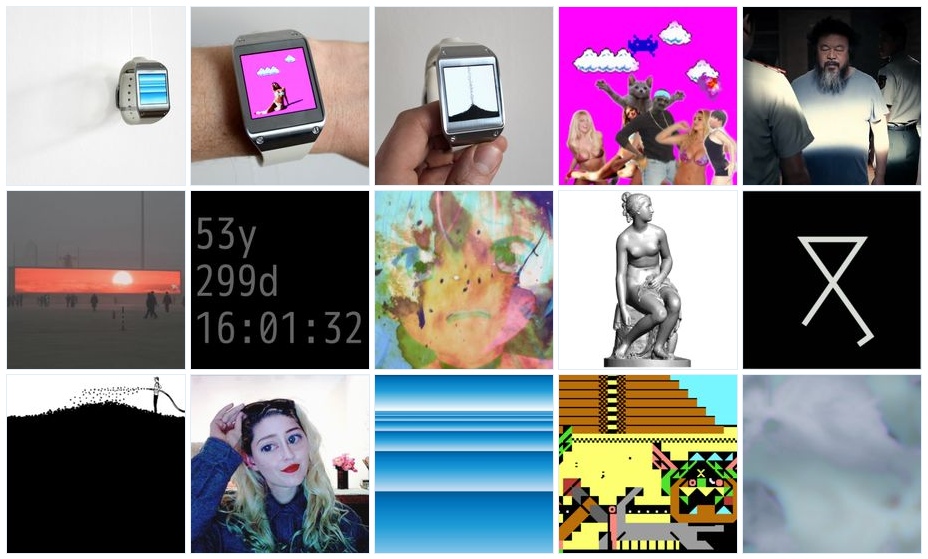 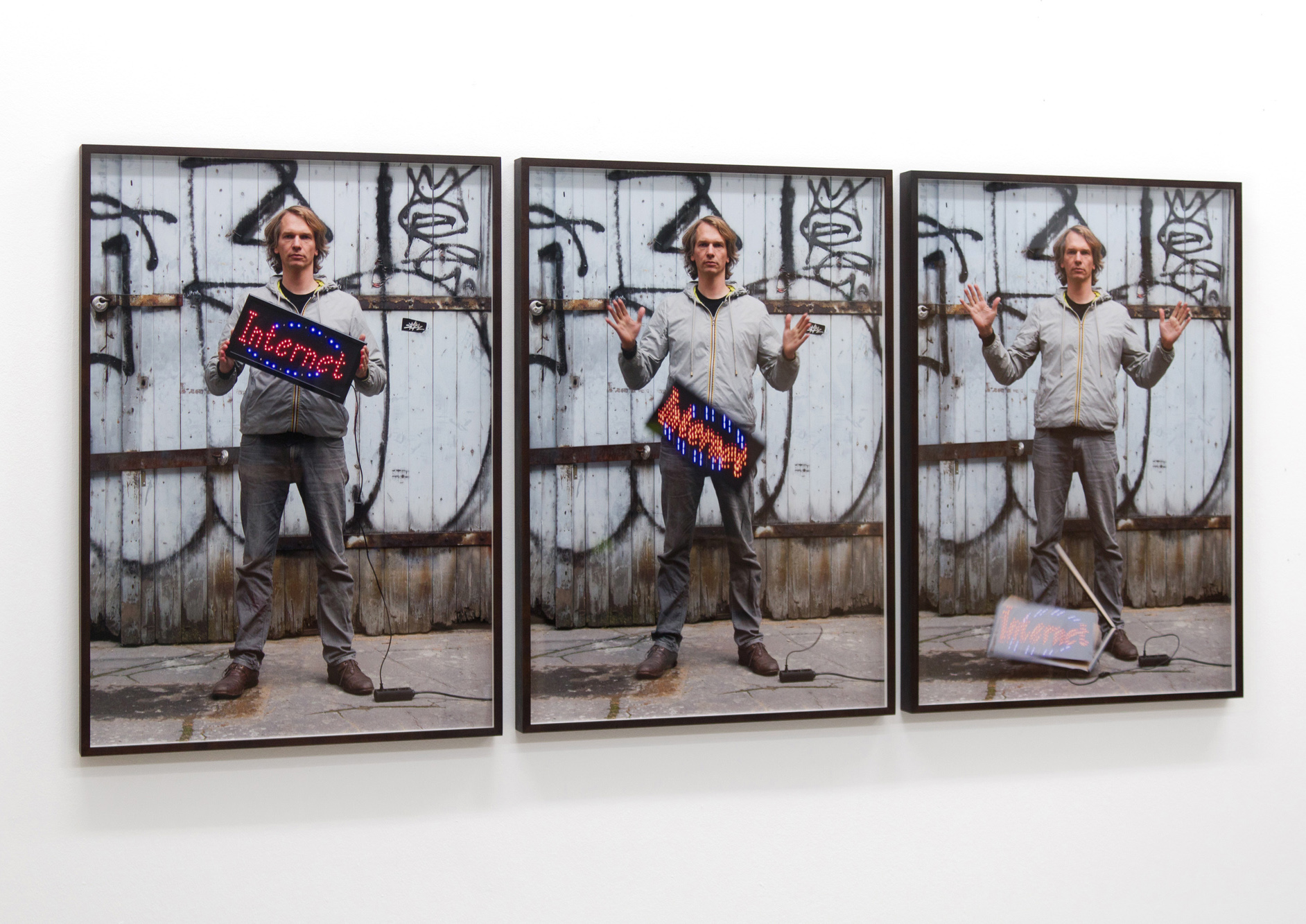 …..read on at
http://www.sueddeutsche.de/digital/aram-bartholl-ein-funkloch-zum-selbernaehen-1.1855574
Tagged with: ARD + süddeutsche

My talk at CCC congress 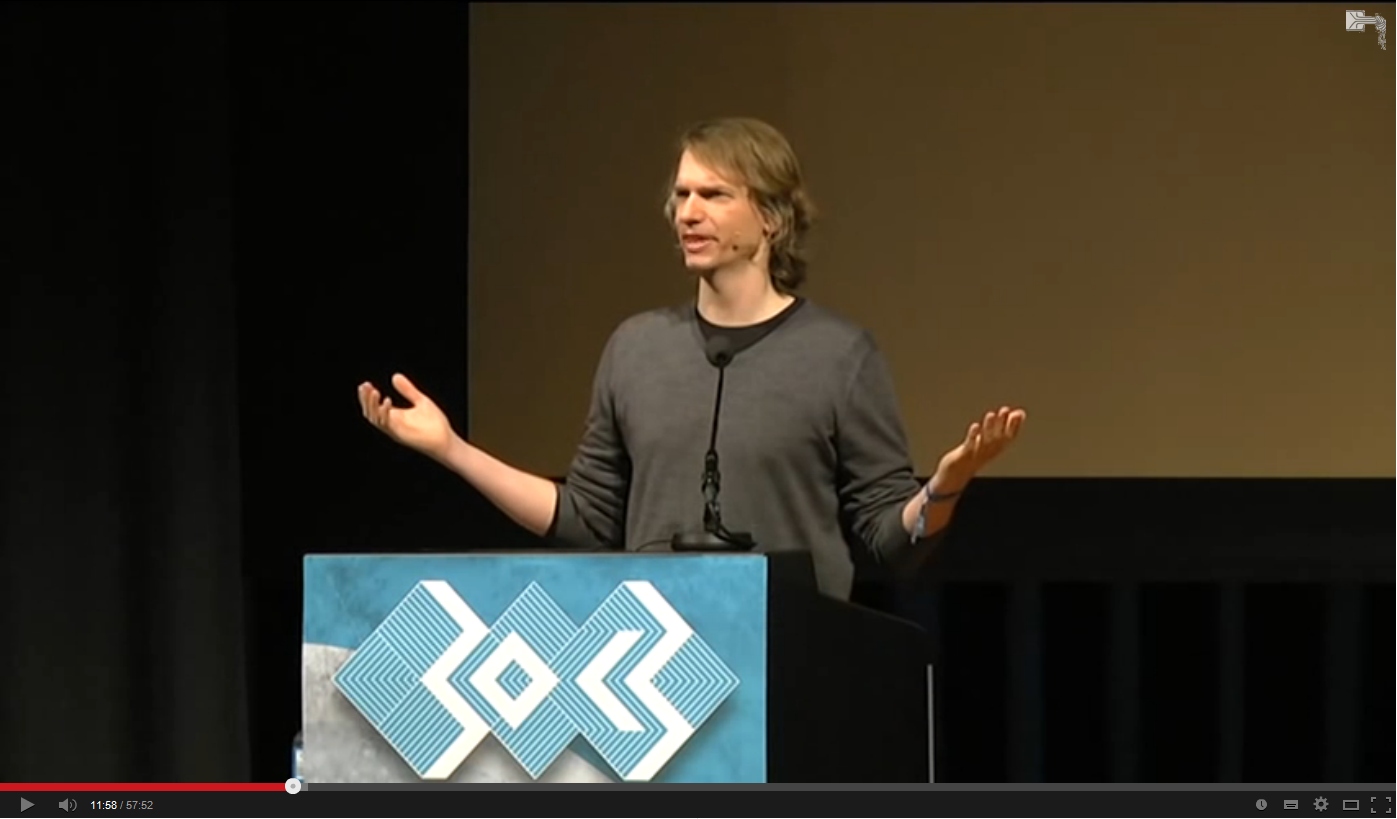 http://www.youtube.com/watch?v=WJBv-4uDdmY
My talk at 30C3 congress in Hamburg last weekend. You can find all recordings of all talks also here http://media.ccc.de/browse/congress/2013/index_1.html Good stuff!

Kill Your Phone! workshop at #30C3

I had a lot of fun running this workshop at the congress last week. Visitors were invited to make their own blocking pouch. We had tons of interesting discussions at the table and it showed a lot of people know much about radio waves and frequencies but often have a hard time working the sewing machine :))
Thx for joining! to be continued… 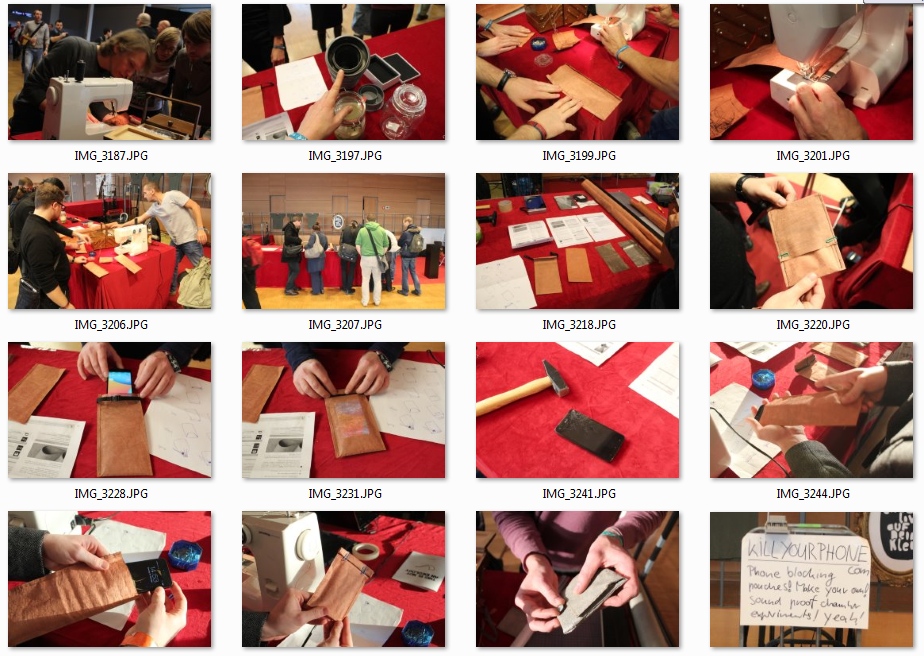 “Open workshop to passively block your phone from sending and receiving. Make your own signal blocking Faraday pouch! How to wrap your phone to kill any wireless connection? How to pack your phone so it can’t record any sound? Which materials work best? Where to get them? What are the cheapest and fastest solutions? We have cloths, tools and a sewing machine. Feel free to join! Bring your own stuff!
http://killyourphone.com/
https://events.ccc.de/congress/2013/wiki/Projects:Kill_Your_Phone! 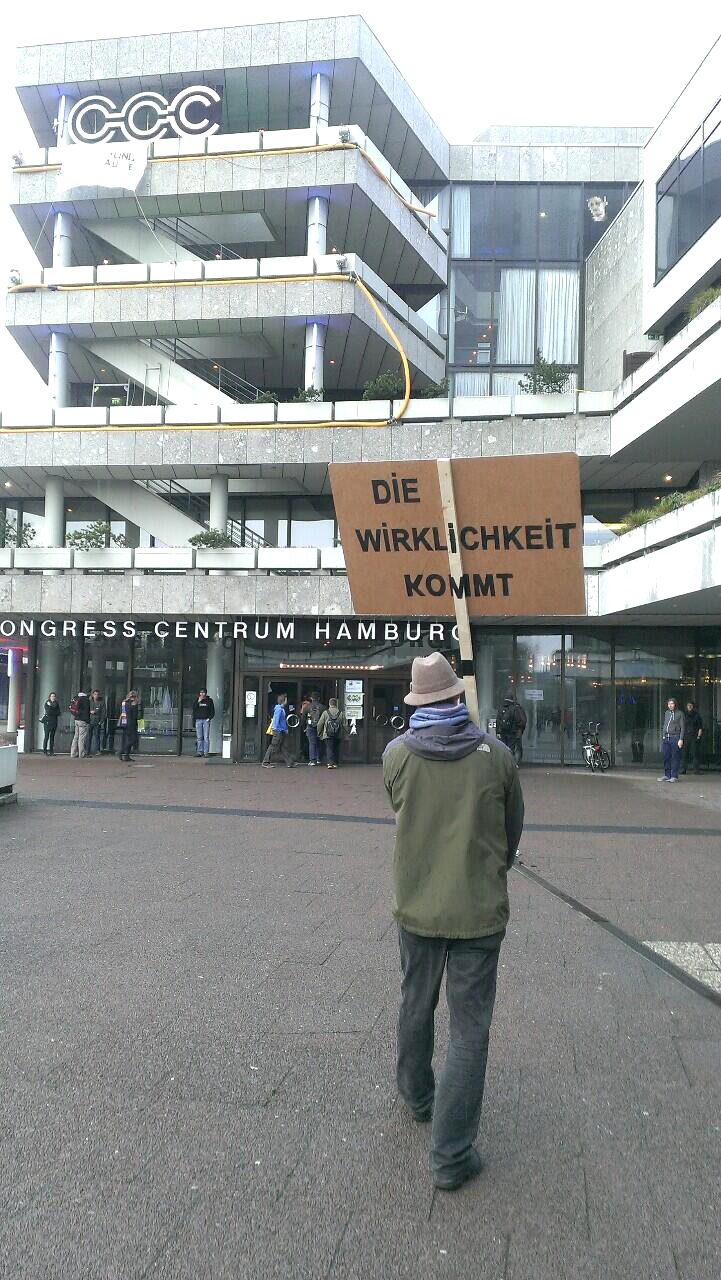