Imagine you Wake Up and There is no Internet

What will happen if one day you wake up and there is no Internet?

The exhibition Imagine you wake up and there is no Internet explores the effects of ubiquitous connectivity and technology in everyday life. Starting from our obsession with digital technologies, the exhibition seeks to enhance the debate about the coexistence of human and machine in the 21st century.

13 artists and 5 art collectives showcase scenarios from the present time and the near future, strategies of disconnection and disorientation, evacuation and escape plans from the city, studies on the information society, snapshots from digital life and the infrastructures that allows us to be connected to the network, and new readings for the political period we are going through. Any sense of certainty for the present and the future seems to have been destabilised.

31 years after the creation of the world wide web, concepts such as space, time, value and labor have acquired new meaning. And these concepts will continue to take on new meaning as the technology that we use the most, changes at great speed leaving us -often- in the position of the observer with little space for manoeuvring. The levels of control and surveillance in the networks we navigate, whether resulting from political decisions or market trends, are often obscure. At the same time, everyday life and personal data have acquired a particular economic value within networks and our obsession with constant connectivity, can only accelerate a technological future where human behaviour becomes predictable or can be predicted to meet political or/and economic trends.

The works in the exhibition highlight moments and fragments of our digital life surfacing issues related to the human-machine relationship and its impact on the public sphere. The exhibition aims at contributing to the discussion on the constantly accelerating dynamics of the Network, our position within it, and finally, the boundaries between a human-driven versus a machine-driven technological world.

you are hereby invited to the opening of OPENCOIL.show

with most cities pavements flooded by ‘dockless sharing vehicles’, OPENCOIL presents works by 10 artists specially selected to fill the vacuum between private and public space. this show is an experimental attempt to physically engage with the rise of ‘landfill capitalism’ by reclaiming ‘micro-mobility’ infrastructure. decentralised and climate neutral. helmets not included. 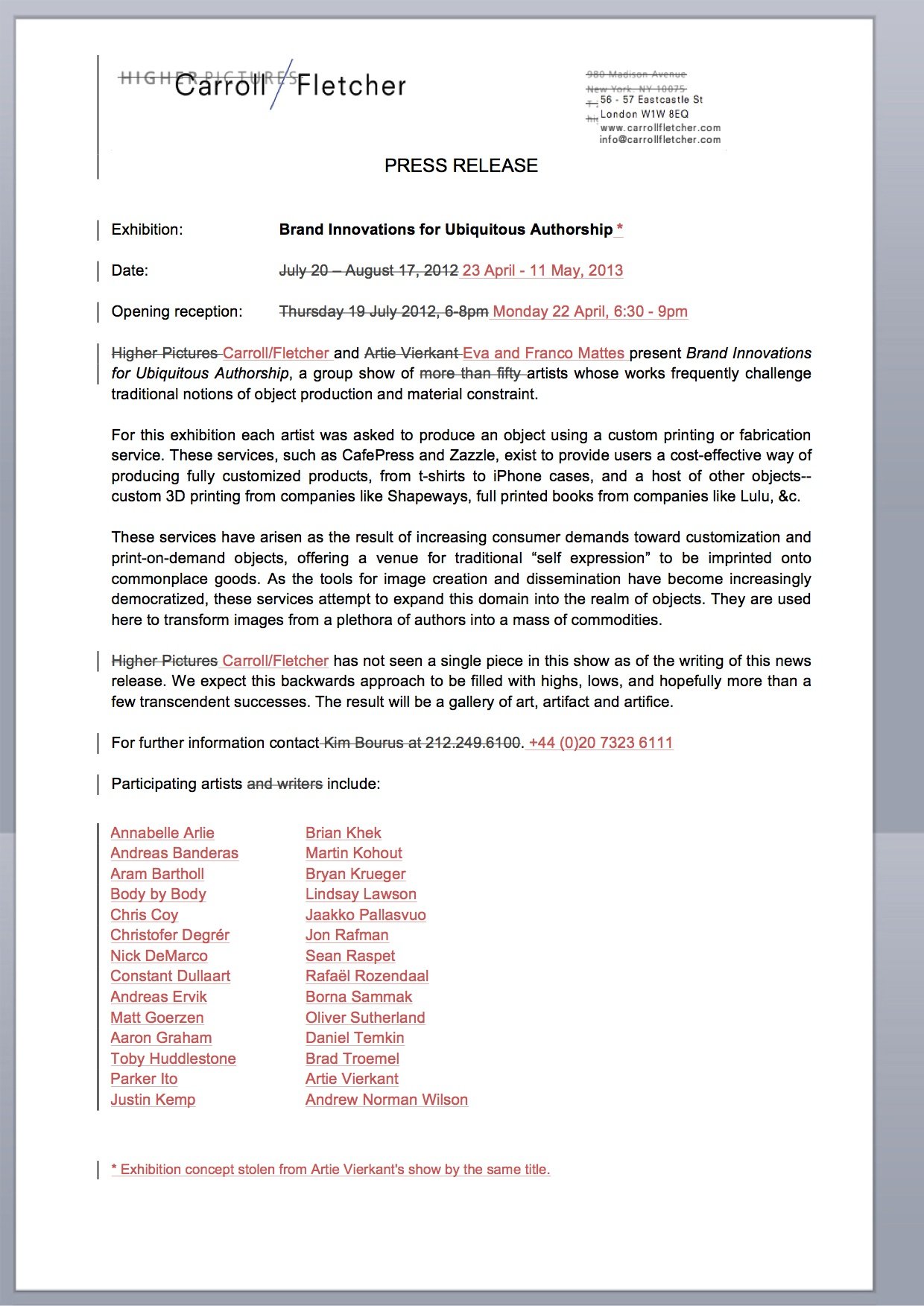 I ll show a new piece “Forgot your password?” at Eva & Franco Mattes’ ‘stolen’ show at Carroll/Fletcher next month. (See also where Artie has ‘stolen’ the concept  from before ;))) Nice press release! I took the liberty to OCR it into machine readable format below.  (NOT EDITED!!! 🙂
———————————————————————————————————————————————————————
i ;_56<57 Eastcastle St London WIW sso www.carrolItletcher.com info@carrolltletcher.com PRESS RELEASE Exhibition: Brand Innovations for Ubiquitous Authorship Date: m2 23 April - 11 May, 2013 Opening reception: 3Fhursday-19-July-2012-,-6-8pm Monday 22 April, 8:30 - 9pm Carroll/Fletcher and Eva and Franco Mattes present Brand Innovations for Ubiquitous Authorship, a group show of anists whose works frequently challenge traditional notions of object production and material constraint. For this exhibition each artist was asked to produce an object using a custom printing or fabrication service. These services, such as CafePress and Zazzle, exist to provide users a cost-effective way of producing fully customized products, from t-shirts to iPhone cases, and a host of other objects- custom 3D printing from companies like Shapeways, full printed books from companies like Lulu, &c. These services have arisen as the result of increasing consumer demands toward customization and print-on-demand objects, offering a venue for traditional “self expression” to be imprinted onto commonplace goods. As the tools for image creation and dissemination have become increasingly democratized, these services attempt to expand this domain into the realm of objects. They are used here to transform images from a plethora of authors into a mass of commodities. Higher-Pietu+es Carroll/Fletcher has not seen a single piece in this show as of the writing of this news release. We expect this backwards approach to be filled with highs, lows, and hopefully more than a few transcendent successes. The result will be a gallery of art, artifact and artifice. For further information wnmct . +44 (0)20 7323 6111 Participating artists andwriters include: Annabelle Arlie Brian Khek Andreas Banderas Martin Kohout Aram Bartholl Bryan Krueger Body by Body Lindsay Lawson Chris Coy Jaakko Pallasvuo Christofer Degrér Jon Rafman Nick DeMarco Sean Raspet Constant Dullaart Rafael Rozendaal Andreas Ervik Borna Sammak Matt Goerzen Oliver Sutherland Aaron Graham Daniel Temkin Toby Huddlestone Brad Troemel Parker Ito Artie Vierkant Justin Kemp Andrew Norman Wilson Exhibition concept stolen from Artie Vierkant's show by the same title.

DVD Dead Drop vol.6: ‘Vertical Video’
March 19 – May 7, 2013 at the Museum of Moving Image NYC
by Sakrwoki aka curatingyoutube.net and Aram Bartholl. 2013, 62 mins. DVD.
Vertical Video is a one-hour selection of amateur videos captured in the 9:16 aspect ratio, first compiled for a special screening in Berlin entitled Vertical Cinema. The DVD includes a special How To video with instructions for adjusting a home theater or other viewing environment to properly experience these works.
Fueled by a proliferation of mobile, inexpensive, high quality cameras and free online distribution platforms, self-trained media producers continue to invent creative uses for media technologies that challenge contemporary viewing behaviors and expectations. Even though the 9:16 aspect ratio is often understood to be “wrong” €“the result of using a camera “incorrectly” €“videos in 9:16 are being created and distributed online at an increasing rate. Unchained from cinema screens, televisions, and computer monitors, media makers are free to create for viewing experiences outside of traditional horizontal exhibition hardware.
Vertical Video is a compilation of videos with a wide range of subjects including architecture, wildlife, bodies in motion, gaming, eyewitness accounts, and current events whose vertical treatment is a natural and fitting decision. Until now, many of these videos have only been seen online where they have been thickly pillarboxed and shrunk to squeeze into the existing horizontal viewing system. This compilation provides evidence that a new generation of media producers, freed from concerns about conventional screening requirements, reject the arbitrary restrictions of the horizontal screen and maintain a more fluid relationship with the frame.
The selection was originally screened at Vertical Cinema Platoon Berlin on Feb 18 2013, see also http://datenform.de/vertical-video-eng.html

How to watch Vertical Video from Aram Bartholl on Vimeo. 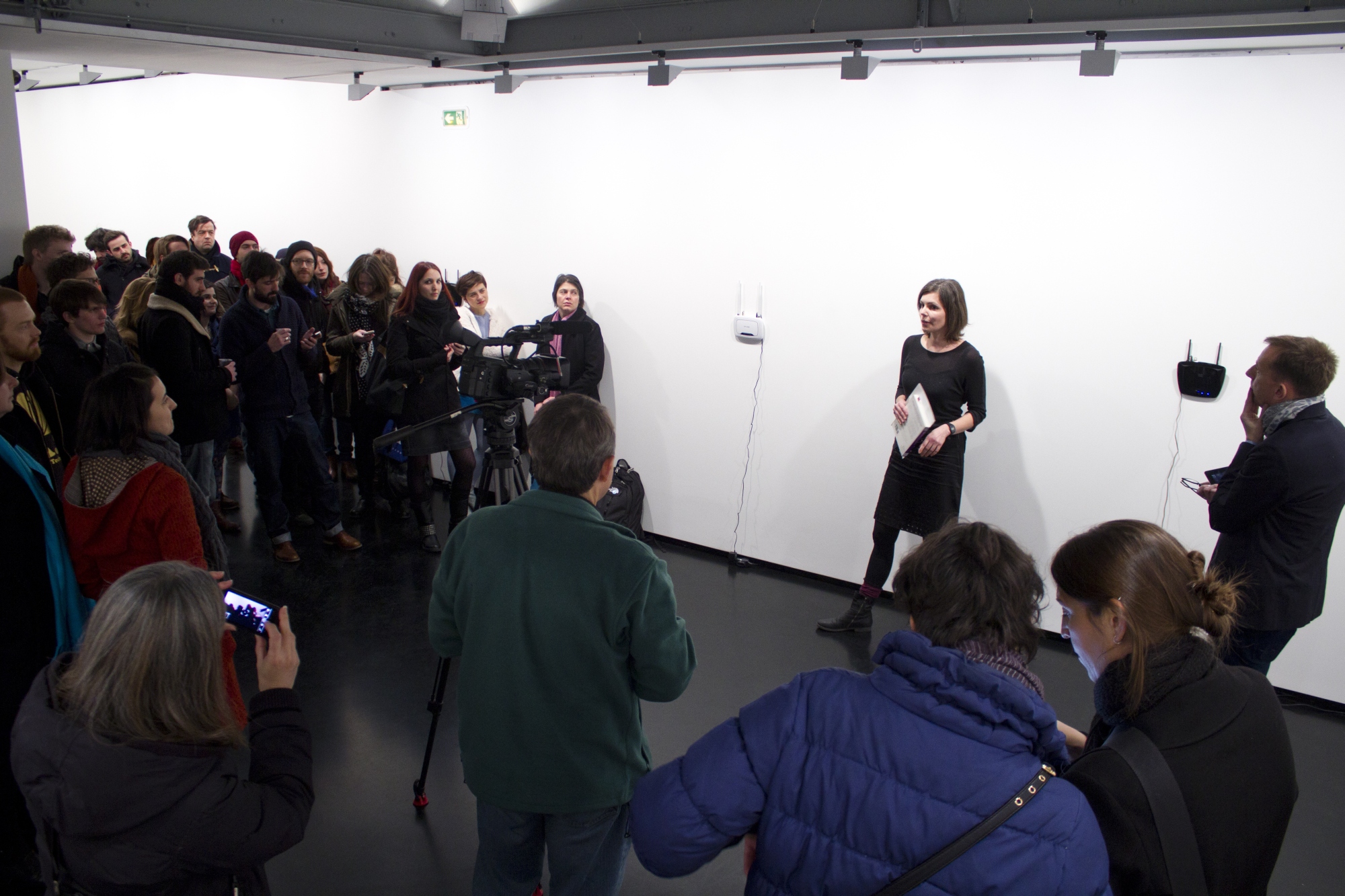 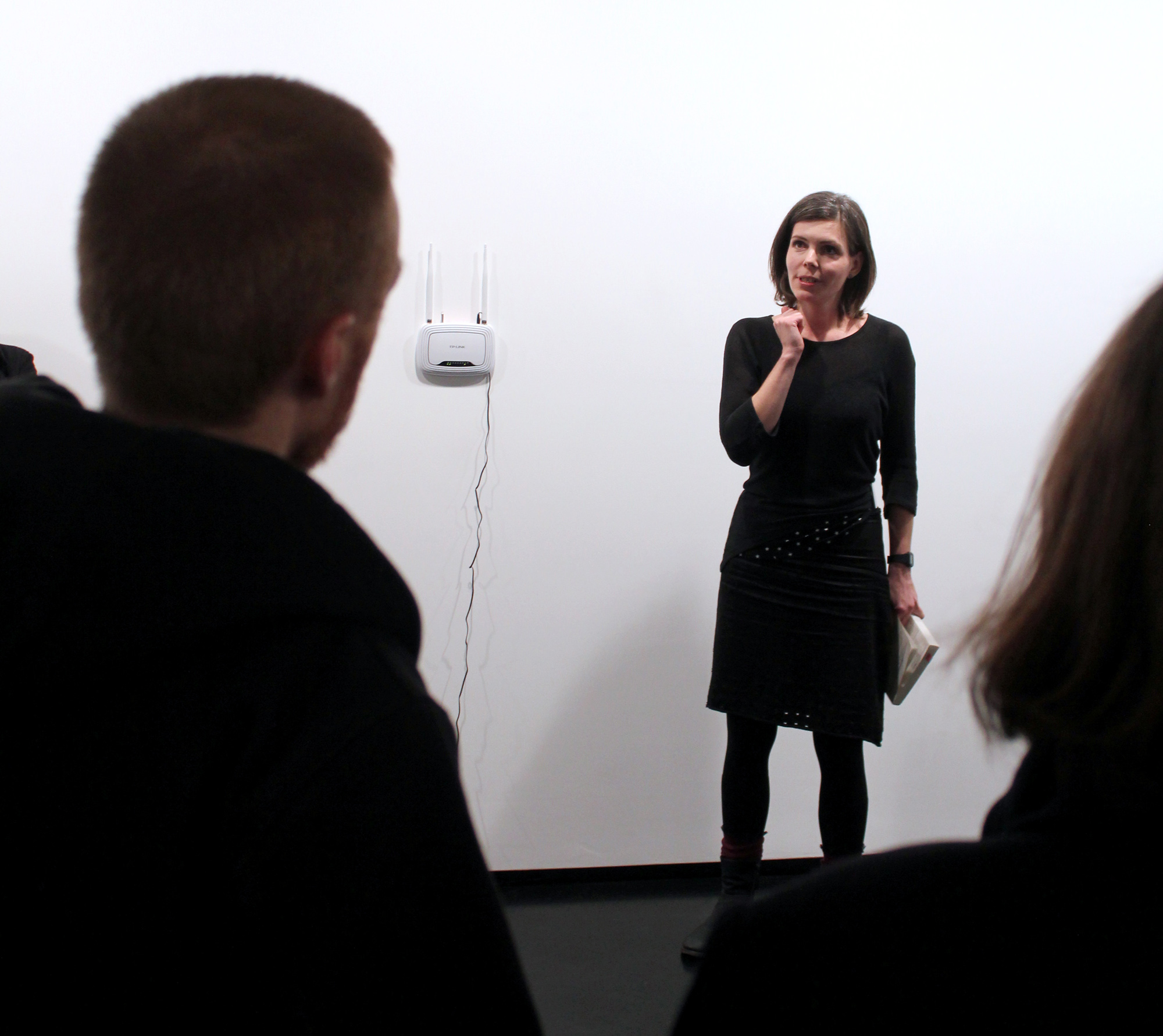 Olia Lialina opening the show at xpo gallery Feb 21, 2013
Thx to Olia for this wonderful and very important opening speech! 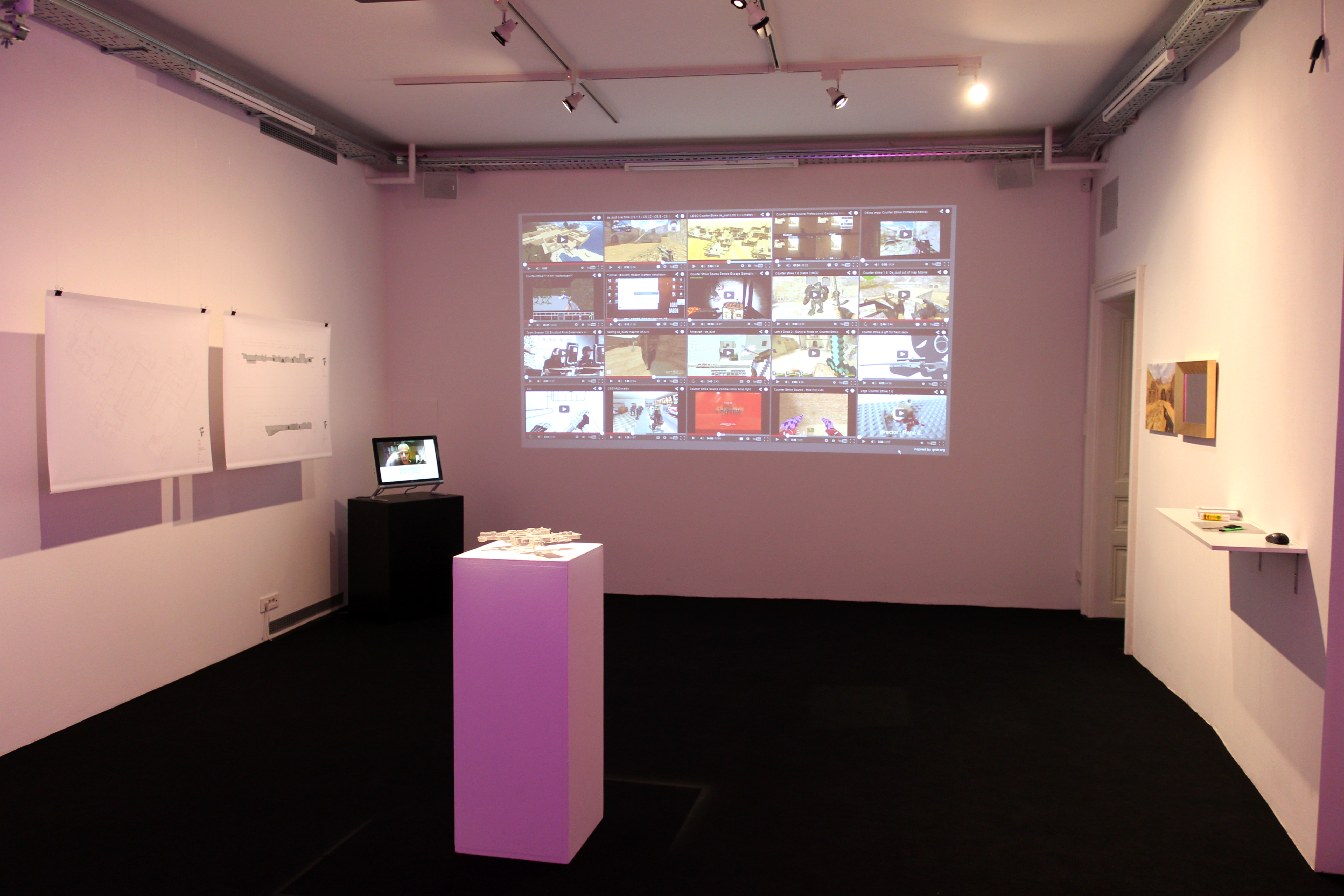 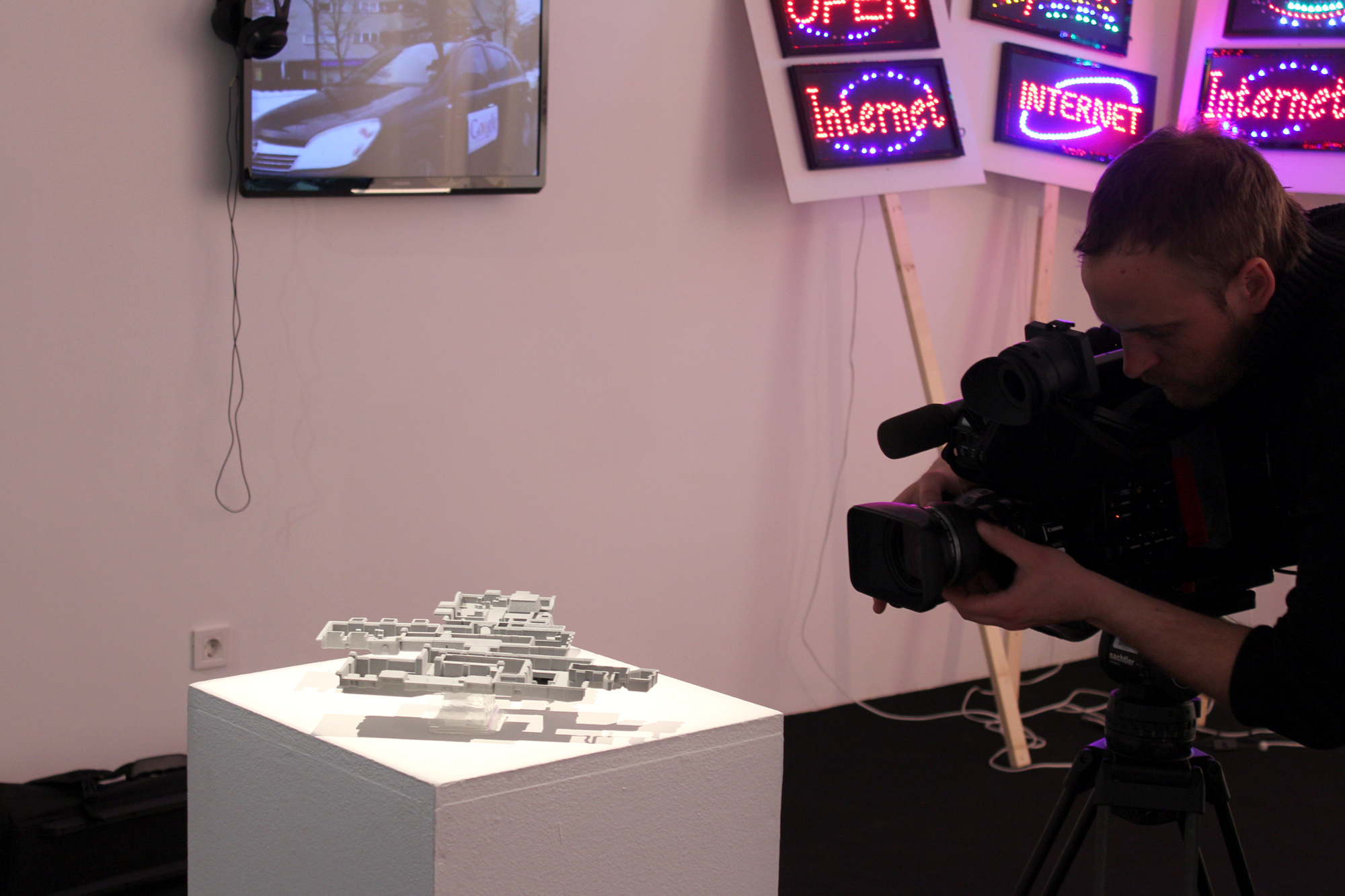 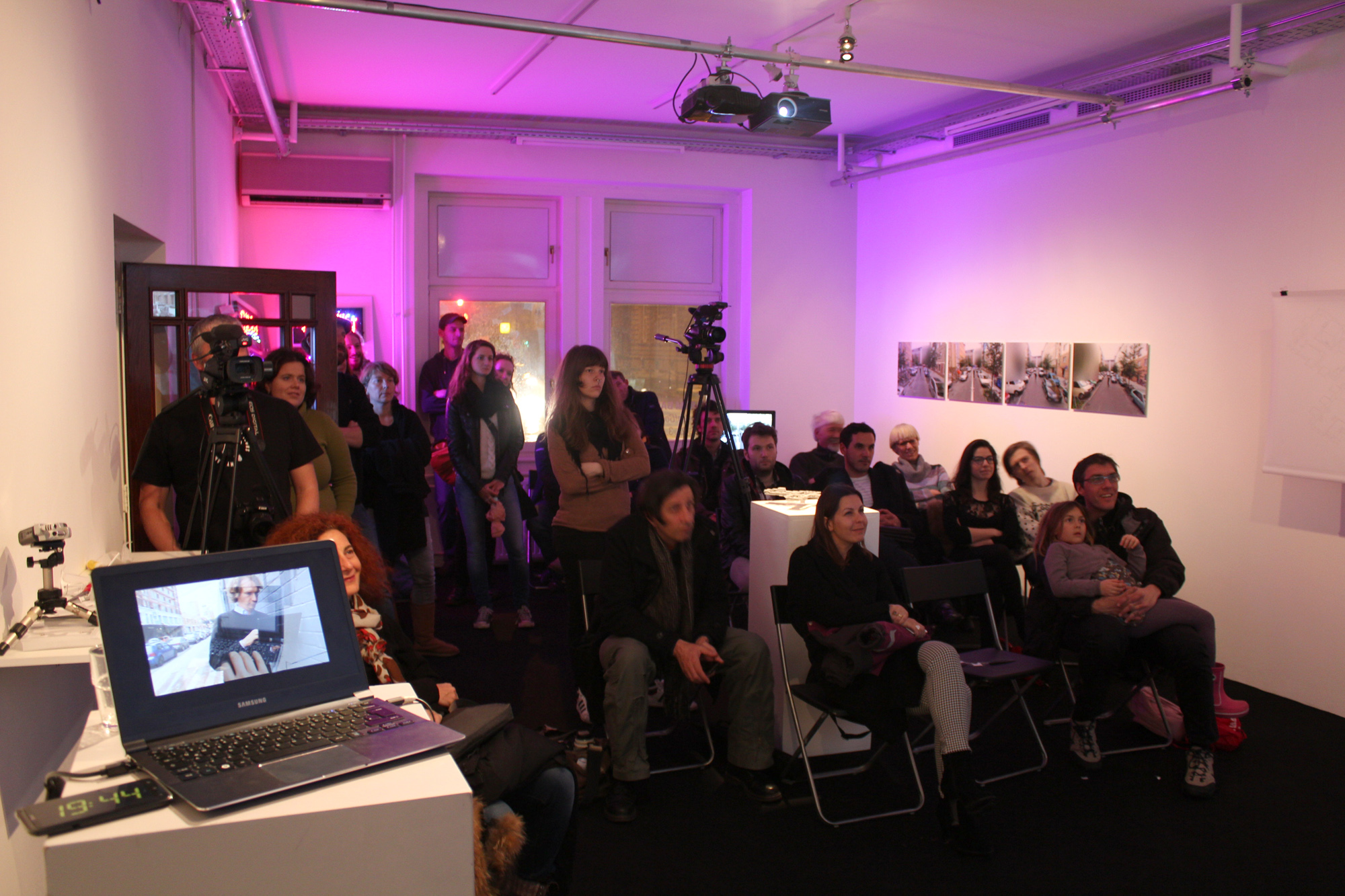